It's soon going to be back-to-school time.

But what better time to buy some new books for your children, your classroom, or your library?

And I've got two great novels to share with you! And better still, I corralled the authors to answer a few questions for Middle Grade Minded Readers!


The Right Hook of Devin Velma by Jake Burt 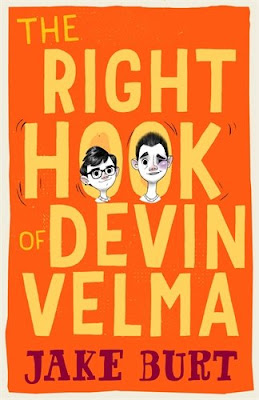 From the author of Greetings from Witness Protection! comes another unforgettable middle-grade novel about friendship and family.
Devin wants to hit it big on the internet by pulling a stunt at an NBA game―one the entire nation will be watching. Addison can’t turn Devin down, but he can barely manage talking to his teachers without freezing up. How’s he supposed to handle the possibility of being a viral sensation?
Addi’s not sure why Devin is bent on pulling off this almost-impossible feat. Maybe it has something to do with Devin’s dad’s hospital bills. Maybe it all goes back to the Double-Barreled Monkey Bar Backflip of Doom. Or maybe it’s something else entirely. No matter what, though, it’s risky for both of them, and when the big day finally comes, Devin’s plan threatens more than just their friendship.
With memorable protagonists and a wonderful supporting cast, The Right Hook of Devin Velma is a one-of-kind knockout in middle-grade fiction. 1. The Right Hook of Devin Velma is one of the best titles I’ve ever heard. Was it always the title?

I'm so glad it appeals! Titles can often be a battle - my first novel went through five of them before we settled on Greetings From Witness Protection! For this one, though, I didn't have to go through nearly as many iterations. We (my agent and I) submitted it to Macmillan as The Right Hook of Devin Velma, and my editor loved it, too. So no major title changes, which is good; I'm a fan of the dual meaning and the cadence of it.

I think a lot of it had to do with my own anxiousness around social media. I was never a big fan, but as you know, promoting your work and supporting other authors as they do likewise is an important part of being a kidlit writer these days. I navigated my way through a fairly steep learning curve on Facebook, Twitter, and in creating my own website (I'm still not on Instagram), though I had a lot of great help, and have since e-met many wonderful people. Still, getting started made me all kinds of nervous, and I think that informed Addison's attitude toward it, too.

I was also inspired by a particular recurring event at NBA games that features prominently in the novel. I don't want to give away too much, but let it suffice to say that it's one of the more awkward traditions in the American public sphere, and I've always thought it was ripe for literary dissection.

3. What’s a typical writing day like? I know you teach full-time, so how do you juggle both careers?

A typical writing day involves me dropping my kid off at camp, then coming home and jumping on my exercise desk for an extended spin-and-type. I write almost exclusively in the summer, when I can devote four to five hours a day to drafting. I do most of my revisions during the school year, because that tends to be a bit more piecemeal. Regardless, I work quickly, mostly because I'm uncomfortable with deadlines - I was always the kid in school who finished the project weeks in advance, just so it wouldn't hang over my head. I'm sure my editor wishes I'd slow down a bit!

I'd have to say it's the respect that veteran authors afford debut writers. When my first novel came out, I was lucky enough to attend Book Expo, where I met such luminaries as Ann M. Martin, Katherine Applegate, Dan Santat, and Jack Gantos. To a one, they were welcoming, enthusiastic, patient, and supportive. I hadn't paid a single one of my metaphorical industry dues, but they still made me feel like I belonged at the table. The kidlit community is truly a phenomenal place to be.

I just finished revisions on book #3, and I'm about 40K into the first draft of book #4. This October, I'll be out on tour for The Right Hook of Devin Velma, too. Exciting times!

To learn more about author Jake Burt, visit his website!

Who wants to talk about dogs? I do!!

Rules of the Ruff by Heidi Lang 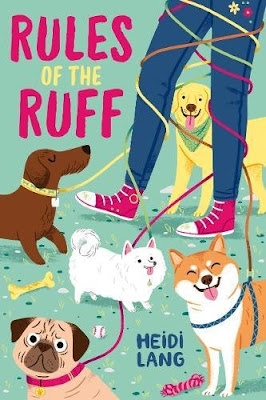 Twelve-year-old Jessie is in for a long summer at her aunt and uncle’s house. Her cousin Ann has a snotty new best friend, which leaves Jessie all alone. But Jessie is industrious, and—not content with being ignored all summer—she convinces Wes, a grouchy neighborhood dog walker, to take her on as his apprentice.
Sure, dog walking turns out to be harder than she expected, but she has Wes’s dog-walking code, the Rules of the Ruff, to guide her, and soon she’s wrangling her very own pack. But when a charismatic rival dog walker moves to town, she quickly snatches up most of Wes’s business—and Jessie decides she isn’t going to take this defeat with her tail between her legs. 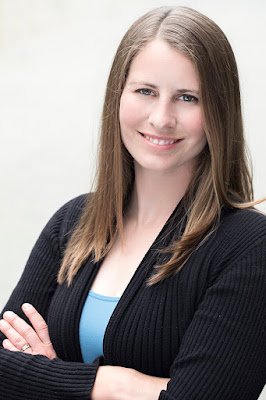 I’d say the biggest difference is that I had to find the magic in ordinary settings and circumstances, instead of having these fantastical backdrops. So instead of the elven mafia feuding with steampunk scientists, I had rival dog walkers. And instead of dragons, I had dogs. Which, I’d argue, are just as magical as any mystical beast. But whenever I write, the story is really about the characters, and people are people no matter which kind of world they’re populating.

I did miss having a writing partner, though. Kati is the one who outlines and keeps us on track, so this time I was forced to keep myself on track, and it made me appreciate what a difficult time I give my sister. Not that I’ll make it any easier on her in our next book, but at least I’ll have more sympathy for her. ;)

I’m going to let you in on a secret: I never planned on writing contemporary. Growing up, I read almost all fantasy and sci fi, and I always thought of myself as a fantasy writer. But as I’ve gotten older, I’ve started to appreciate how much potential for drama and humor is in real-life situations. My husband is probably to thank for that - we have a game we play where we’ll discuss an awkward situation and then brainstorm ways it could have been more awkward.

It was actually on a dog hike with him that I came up with the idea for RULES OF THE RUFF. We had a combined pack of a dozen dogs out on the trail with us (we were both dog walkers), and we started joking about hiring someone whose only job would be to follow behind us, cleaning up after the dogs so we wouldn’t have to anymore. And then we began brainstorming different tasks this poor unfortunate would have to accomplish to work their way up the pack hierarchy, and from there the “rules” and Jessie’s character were born. Once I had that idea, I couldn’t let it go, and then one day I realized I had to write it. And it was so much fun! I love writing contemporary now as much as I love writing fantasy, and I’m so glad I decided to try it. 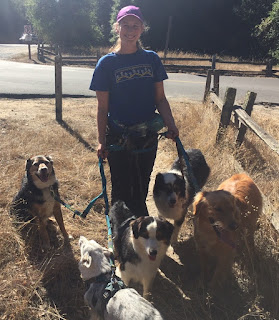 I’m an early bird, so most days I’m up by 4 or 5am. I find I get lazier and lazier as the day goes on, so I usually try to take my dogs for a run or walk first, and then get immediately into writing before my brain comes up with any clever procrastination tactics. From there, it depends on how close to deadline I am. The closer I am, the longer my writing day. It’s amazing how panic and desperation can motivate a person! ;D I don’t have set time or word count goals - I’ve tried that in the past and it didn’t work for me, so mostly I just work until I reach that point where my brain feels like mush and my writing is going flat, and that’s when I’ll stop for the day.

How much I love it! My debut, A DASH OF DRAGON (with Kati Bartkowski) was first written as young adult before we realized it would fit better as middle grade. Once we revised it and signed with our agent, we were firmly on the middle grade track and I’m so glad. I feel like you’re given more freedom to write over-the-top characterizations and exaggerated situations in middle grade, and it’s just so fun. I still plan to write YA and even adult in the future, but I think middle grade will always be first in my heart.

Another surprise? How good it feels to hear that a kid loved your book. I always feel like a kid compliment is worth a dozen adult compliments, because if they say something, they really mean it, and when they love something, they love it with their whole hearts. Maybe that’s the biggest reason I love writing middle grade, come to think of it.

Kati and I are currently hard at work on book three in the Mystic Cooking Chronicles, and I just submitted a new middle grade contemporary to my editor earlier this month, which I can’t wait to talk more about! Soon… ;)

Want to learn more about Heidi and find out where to order her book?
Click here!

Thanks Jake and Heidi! I can't wait to read your books!

Posted by WendyMcLeodMacKnight at 3:49 AM

Loved the interviews! I always love hearing about the inspiration behind stories, and also the vastly different "typical" writing days. Thank you, Heidi, Jake, and Wendy!