Guest post by Jen Petro-Roy, author of Life in the Balance AND GIVEAWAY!

When I was in kindergarten, I thought my teacher lived at school. It made sense, didn’t it? That was the only place I saw her—when I got there in the morning, she was there, setting up the classroom, putting out the toys, and greeting me with a smile on her face. When I left, she was still at school. So she obviously lived there….right?

I don’t remember all the details, but I apparently was utterly in shock after running in to my teacher at the grocery store. Why was she…away from the school? Did she…have her own home? Was she…her own person?

It’s not just kindergartners who struggle with this fact. Growing up, it was often hard to reconcile the reality that adults weren’t just there to discipline and take care of me. I wasn’t selfish, but I was self-centered in that little kid way, where my reality was central to my mind. I didn’t always understand that the authority figures around me—my parents—were their own people, too. They had their own history, their own problems and struggles.

In my new book, Life in the Balance, Veronica is confronted with the reality that her mother has a problem. Veronica’s mother is an alcoholic, and after struggling for a long time with her addiction, she’s decided to enter a treatment center.

Sadly, there are so many kids dealing with this same reality. Veronica is lucky in that her mother doesn’t protest toohard—she doesn’t fight back against the truth that she needs additional help—but Veronica is still affected by the turn her family has taken. After dealing with her mom’s addiction, the missed softball games, the late nights “out for drinks” with colleagues, and the lying, Veronica now has to come to terms with the fact that her mother will be leaving for an extended period of time.

Adults are people, too, and I think the middle grade fiction is such a wonderful place to explore this reality. I love writing for middle schoolers because of where they are in life—that beautiful, confusing middle zone where they’re still so reliant on family members but also starting to define their life outside of the home. Where they’re clinging more tightly to friends and trying to establish their identity but still want that closeness with their parents.

In Life in the Balance, Veronica isn’t sure exactly what that identity is yet—she’s always played softball but is now starting to fall in love with singing. She wants to be close to her family but her mom is drifting away. And her best friend doesn’t understand the depth of Veronica’s anger at what is going on.

Because just like adults are humans, kids are, too. We all interact with each in a complicated dance. And that’s what the best books show—the difficulties of being human and of being in relationships. The way we all affect each other, in good and bad ways. 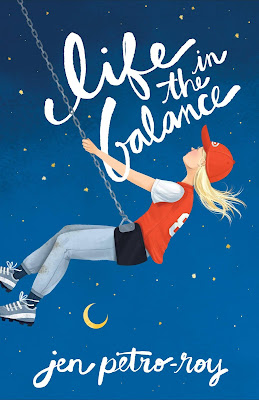 Jen Petro-Roy writes "honest books with heart," about kids who are strong, determined, unsure, struggling to fit in, bubbly, shy, and everything in between. She is the author of P.S. I MISS YOU, GOOD ENOUGH, YOU ARE ENOUGH, and LIFE IN THE BALANCE (out February 2021), all from Macmillan/Feiwel & Friends.

When she isn't writing, Jen can be found reading, playing board games, belting out songs in the car to embarrass her two daughters, and working as an eating disorder awareness advocate.

Leave a comment below between February 15th and February 20th and you'll be entered to win your own copy of Jen's wonderful new book!

a Rafflecopter giveaway
Posted by WendyMcLeodMacKnight at 4:42 AM No comments: