The Rabbit's Gift By Jessica Vitalis

I recently had the opportunity to chat with author Jessica Vitalis about her wonderful new novel, The Rabbit's Gift, which comes out October 25th! I loved this book so much! 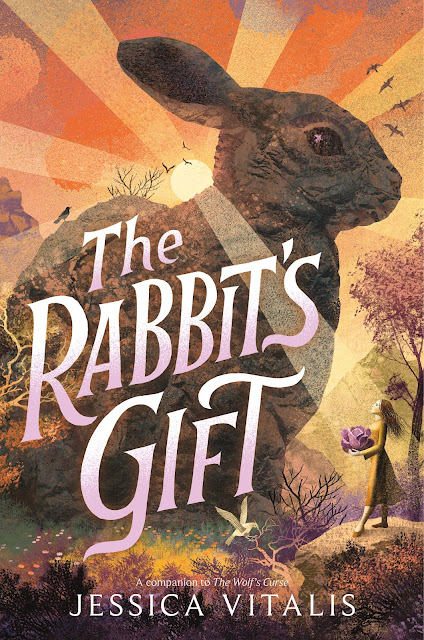 Quincy Rabbit and his warren live a simple yet high-stakes life. In exchange for the purple carrots they need to survive, they farm and deliver Chou de vie (cabbage-like plants that grow human babies inside) to the human citizens of Montpeyroux. But lately, because of those selfish humans, there haven’t been enough carrots to go around. So Quincy sets out to change that—all he needs are some carrot seeds. He’ll be a hero.

Fleurine sees things a little differently. As the only child of the Grand Lumière, she’s being groomed to follow in her mother’s political footsteps—no matter how much Fleurine longs to be a botanist instead. Convinced that having a sibling will shift her mother’s attention, Fleurine tries to grow purple carrots, hoping to make a trade with the rabbits. But then a sneaky rabbit steals her seeds. In her desperation to get them back, she follows that rabbit all the way to the secret warren—and steals a Chou.

Quincy and Fleurine have endangered not just the one baby inside the Chou, but the future of Montpeyroux itself—for rabbits and humans alike. Now, they’ll have to find a way to trust each other to restore the balance.

Told from both Quincy’s and Fleurine’s perspectives, The Rabbit’s Gift will enchant fans of Katherine Applegate, Gail Carson Levine, and Anne Ursu.

1.     Hi Jessica! I absolutely adored The Rabbit’s Gift! It is one of the most creative fairy tales I have ever read!  Can you talk about your inspiration?

Absolutely! After writing The Wolf’s Curse, which I always thought of as my “death” book due to the Grim Reaper mythology, I really wanted to write a companion novel about birth, but for a long time I couldn’t think of anything appropriate for middle grade readers. Then a critique partner asked me if I was familiar with La Fée aux Choux (The Cabbage Fairy), which is a short, silent film based on the French mythology that babies grow in cabbage plants. As soon as I watched the film (I highly recommend googling it!), I knew right away that I’d found the seed for my next story––one where human babies are grown in cabbage-like plants and delivered by rabbits!

2.     I love that the first time we meet Quincy, he’s sharing his perspective on heroes and villains and his realization that whether we considered someone (or ourselves!) one or the other depends on whose side we’re on. What made you want to state that up front?

When I first tried writing The Rabbit’s Gift, I thought I needed an omniscient narrator since that’s what I’d used in The Wolf’s Curse. But my critique partners kept telling me the voice sounded too much like Wolf, so I decided to write from dual points of view—a young male rabbit and a human girl. Rather than label one of them the protagonist and one of them the antagonist, I wanted to play with how perspective impacts the stories we tell. When I sat down to start writing, Quincy showed up and insisted on talking about heroes and villains, so I let him run the show!

3.     An interesting through-line in the story is that both Quincy the Rabbit and Princess Fleurine are forced into roles because of circumstances beyond their control — his size, her being royalty. What message do you hope your readers will take away from their attempts to change that narrative?

One of the things I’ve noticed in my own life as a stay-at-home mom, writer, and introvert, is that when I spend too much time alone, my own problems or issues take on an oversized importance relative to the rest of the world. In The Rabbit’s Gift, Quincy and Fleurine are both so focused on their own unhappiness that they both make mistakes with grave consequences; it’s not until they start to put others first and think about the world around them that their lives start to change for the better. So I think one of the messages in this story is that true happiness rarely comes from trying to change things out of our control; rather, it comes from working to build strong relationships with our friends, family, and community, and by doing our part to try to leave the world a little better than when we found it.

4.     One thing that you do so well is show how easy it is for the older generation (and some of the younger!) to say “Well, that’s the way it always is.” Change isn’t easy, but I hope this really encourages your readers to push for a better future!

I hope so, too! There is so much happening in the world right that that gives us all cause for concern; it can be easy to feel small and inconsequential when there are so many systemic problems that need addressing, but I hope young readers will grow up feeling empowered to ask big questions and search for big answers.

5.     The need for cooperation is central to the story and brought to mind how much healthier our planet would be if that was happening more. Can you talk about that?

Absolutely! In The Rabbit’s Gift, human babies are grown in cabbage-like plants and delivered by rabbits. In return, they receive the purple carrots essential to their survival. This symbiosis is the theme upon which the whole story is built, and I hope it shines light on our own tenuous dependency on the natural world. Because the story was written in the first half of 2020, when our divides as a modern nation were coming into sharper relief than ever before, I also wanted to write a story that reminds readers that it’s not only our connection to the natural world that we need to mind, but our connections with each other—as family, as friends, as neighbors, but most importantly, as humans.

6.     All of the characters are wonderful, but I adore Quincy!  How hard was it to write from a rabbit’s perspective?

On one hand, writing from Quincy’s perspective wasn’t all that difficult because I knew he needed to have the same type of character arc as all of my characters. And it was actually a lot of fun trying to envision seeing the human world for the first time from his perspective. On the other hand, I discovered while writing this story how little I actually knew about rabbits! For example, it wasn’t until I built their entire world around the rabbits needing nutritious purple carrots that I learned that carrots aren’t especially good for real rabbits due to their high sugar content. And I had no idea until after I’d already written certain scenes that rabbits are mostly color blind, are decent swimmers, and have an extra (clear) eyelid that allows them to sleep with their eyes open. Thankfully Angora Roux aren’t real rabbits, so I was able to take plenty of liberties for the sake of the story!

I’m glad you asked! My next book, Coyote Queen, publishes with Greenwillow/HarperCollins in the fall of 2023. Coyote Queen is the book of my heart, and the reason I set out to become a writer more than 15 years ago. It’s the story of a girl who enters a beauty pageant desperate to win the prize money to escape her abusive stepfather, only to discover that she’s turning into a coyote. Another (as of yet untitled) book will follow in 2024.

Want to learn more about Jessica and her books? Click here!

Posted by WendyMcLeodMacKnight at 3:00 AM No comments: