Interview with Jonathan Roth, Author of BEEP AND BOB BOOK THREE: TAKE US TO YOUR SUGAR 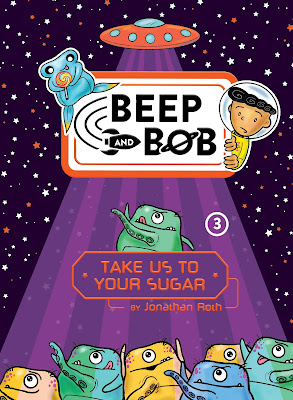 Beep and his best friend Bob hatch a plan to save Halloween—and their school—in this third book in the hilarious, action-packed Beep and Bob series!
It’s October in space, and Bob is getting excited for his favorite holiday: Halloween. When Bob tells Beep that soon they’ll get to dress up like monsters and get as much free candy as they can carry, Beep thinks he has gone to heaven. But Lani informs them that Halloween isn’t celebrated at Astro Elementary.
Bob cannot imagine life without Halloween! He appeals to Principal Quark, but with no success. Determined to save Halloween, Bob and Lani organize a secret club: SCARES (Scary Costumes Are the Right of Every Student, or, more truthfully, the Society of Candy Addicts who Rely on Energy from Sugar).
As the secret club grows, Halloween fever invades Astro Elementary. Unfortunately, a horde of grotesque aliens, attracted by the treats, also invades the school on the last day of the month. With everyone in costume, no one can tell who’s who. Beep and Bob may have saved the holiday, but can they somehow use their sugar-addled wits to save the school?

1.    Hi Jonathan! I’m so excited that Beep and Bob are back! My first question: how did you ever come up with these wonderful characters?

I wish I knew! It all began when I was struck by the emotion of a boy who appeared to me who was torn between his joy at being chosen to attend a select school in space and his pure terror of everything space related (the tension between joy and fear is a big theme of my series, but I didn’t realize this until much later). I also knew, very early on, that this boy (Bob) would only find the help he needed by helping someone even more in need than he was, and that’s when little lost Beep appeared.

2.   The newest Beep and Bob book takes place at Halloween! Can you tell us about it? What did you dress up as for Halloween when you were a kid?

The first two books featured black holes and the Starship Titanic, but book 3 (TAKE US TO YOUR SUGAR) gets really horrific: the sugar machine in the school cafeteria breaks, and Bob has nothing sweet to eat at all! To make matters worse, he discovers Halloween isn’t celebrated at Astro Elementary, so no free candy in sight. Luckily, they make up a new holiday – Astroween – in which free candy is also passed out. Not so luckily, just as all the kids are dressed like aliens, real aliens attack the school.

I don’t remember ever dressing as an alien for Halloween when I was a kid, but I did go as Batman, Spiderman and one year, I can’t remember why, as a postal carrier (though I knew it also did make me feel kind of heroic).

3. The Beep and Bob books are early readers, a category of children’s books I particularly love. What made you decide to write for younger elementary school kids?

Writing for that age wasn’t so much a conscious decision as what came out of me when I got frustrated with years of rejections of picture books and middle grade novels and just sat down to write something silly and fun from my heart. It was definitely not something I had any plans of submitting, and when I saw the final word count (around 10,000) I didn’t even know where it would begin to fit. But after some great positive response from first readers, and researching genres, I realized it would work perfectly as a chapter book series (which I would also illustrate) and that’s how I pitched it. To my surprise and gratitude, I soon landed an agent (my second) and about a month into submissions she got us a four-book deal.

In retrospect, I think I benefited from both the power of letting go and from all the practice I had put into my other projects. My voice and humor level also lends itself best to the 6-9 year old crowd, and this project really brought that out.

4. Are you already working on another Beep and Bob book? And hints?

Book four, DOUBLE TROUBLE, releases this December 11. In that one, Beep and Bob accidentally make evil duplicates of themselves while working late at night on a homework assignment. And though the evil duplicates are nice enough to finish the project, they also then try to take over the Earth (like everything, evil duplicates have their pluses and minuses).

Only in movies and dreams…but I have seen the International Space Station and the Space Shuttle fly overhead (as bright, fast moving points of light) which was very cool. And I’ve met a number of astronauts, including four from the Apollo moon trips, who I guess would count as a bit other-worldly.

Want to know more about Jonathan and where you can buy BEEP and BOB? 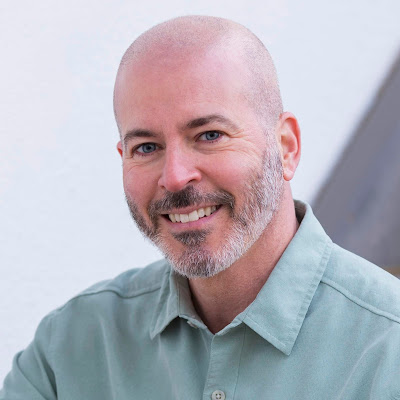 Posted by WendyMcLeodMacKnight at 6:30 AM