THE COLLECTORS by Jacqueline West

One of my favorite middle grade reads of the past year has been THE COLLECTORS by Jacqueline West. In middle grade circles, she’s probably best known as the author of the New York Times bestselling series THE BOOKS OF ELSEWHERE, the first book of which I’ve used as a read-aloud title in my classroom. When I saw THE COLLECTORS was being released last fall, it was one of those books that I pre-ordered and counted down the days remaining until I’d be able to read it. 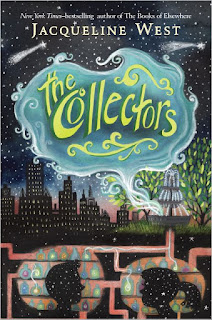 I’ll let the text from the cover speak for itself:

Do you see that marble in the grass? The tiny astronaut with one arm raised? The old-fashioned key in the gutter?

Van sees them. Van notices all sorts of things. But usually no one notices Van. He’s small, and he’s always the new kid, easy to overlook. Then one day he watches a mysterious girl and a silver squirrel dive into a fountain to steal a coin.

Not all wishes are good, you see, and even good wishes can have unintended consequences.
And Van is about to find out just how big those consequences can be.

Like THE BOOKS OF ELSEWHERE series, THE COLLECTORS revolves around a main character who has found a way to bridge between his mundane everyday life and a hidden, magical realm barely removed from the world he knows. He encounters a variety of characters, both human and non-human, trying to claim his loyalties. With so many strange things happening to him all at once, the decisions Van has to make and the stakes he faces become increasingly complicated.

West tells her story in THE COLLECTORS with a mysterious and slightly menacing tone, along with humorous touches throughout, in a voice reminiscent of Neil Gaiman. The work she has put into creating a fantastic world with relatable characters and thoughtfully crafted figurative language makes this book one that will feed the imagination of any middle grade reader.
Posted by Tom Mulroy at 4:59 AM