ALL OF ME by Chris Baron

I was delighted to have the opportunity to read and review an ARC of Chris Baron's forthcoming middle grade debut, ALL OF ME. 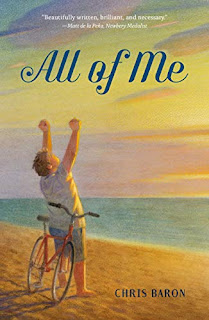 Ari has body-image issues. After a move across the country, his parents work selling and promoting his mother's paintings and sculptures. Ari's bohemian mother needs space to create, and his father is gone for long stretches of time on "sales" trips.

Meanwhile, Ari makes new friends: Pick, the gamer; the artsy Jorge, and the troubled Lisa. He is also relentlessly bullied because he's overweight, but he can't tell his parents―they're simply not around enough to listen.

After an upsetting incident, Ari's mom suggests he go on a diet, and she gives him a book to help. But the book―and the diet―can’t fix everything. As Ari faces the demise of his parents' marriage, he also feels himself changing, both emotionally and physically. Here is a much-needed story about accepting the imperfect in oneself and in life.

Ari’s voice pulled me right in – the story, written in free verse, is compulsively readable. Ari’s struggles, including body image, bullying, and family instability, are raw and achingly real, but moments of joy and growth throughout the story balance the heartbreak with hope.

I briefly worried that this was shaping up to be an “and then I lost weight and life was great!” story (which I would’ve really had a problem with), but no – Ari’s transformation is about so much more than physical change. His internal change is far more significant, as he grows comfortable in his own skin, so to speak, realizing he is all he needs to be.

I loved Ari’s character, and also especially loved his friend Lisa. Both were wonderfully complex and sympathetic characters. I did miss Pick when he disappeared midway through the book (off to Australia); I suspect this was somehow necessary for Ari’s character development, but I missed the reasoning behind it.

The intensity of emotions in this story make it well-suited to the verse format. A powerful story, beautifully told. Highly recommended.