From all the time I’ve spent on Twitter trying to build up my social media street cred, I’ve come to realize that writing conferences are going on everywhere and all of the time. I’ve never been to one so they’re all a little mysterious to me; I’ll read posts about people who are so excited to attend them, or I'll see pictures they take of people they meet up with, along with lists of the agents and authors amassing their collections of airline miles as they travel across the country to make appearances. Meanwhile I still wake up every morning hoping my lesson plans for the day will be adequate, and the school lunch menu will include something I can manage to choke down with minimal effort.

But not long ago I realized that this premise isn’t exactly true. It turns out there is one writing conference I’ve attended, and several times over.

Up here in the suburban sprawl surrounding the Twin Cities area, an organization known as Success Beyond the Classroom hosts a Young Authors Conference on several days throughout the school year. The school where I teach has sent students to participate for well over a decade. I’ve been fortunate enough to chaperone this event a number times, most recently just a few weeks ago. The conference was held at a local college with the campus all but abandoned between terms, making it the perfect place for a few hundred middle grade kids to spend their day moving from session to session and learning about many different kinds of writing. Our school had close to twenty fourth and fifth graders attending this year, chosen by their language arts teachers to be some of the most expressive and motivated writers in their classes. Usually these turn out to be some pretty interesting kids to hang out with on a field trip.

The day started in the Great Hall with a morning dance party that eventually evolved into a keynote address, from author Michael Perry, after which the students attending began rotating through their sessions. These were led by local artists of nearly every imaginable voice, including fiction, non-fiction, illustration, poetry, and songwriting to name a few. Luckily, as a chaperone, I was able to crash a few sessions and take in some of the excitement.

My first session was the one I was looking forward to the most, a talk on magical realism in fiction by Abby Cooper. (Her book Sticks and Stones will be released next month, by the way, and you should probably add pre-ordering it to your To-Do List for June.) Abby is one of several authors to get a break through Brenda Drake’s Pitch Wars/Pitch Madness contests, which is also true for a number of us here at Middle Grade Minded. Because of that we all share a few social networking ties, and I was looking forward to finally meeting Abby in the real world. I messaged her ahead of time to let her know I’d be there and would do my best to find her. When I saw that one of the girls in my homeroom class had a ticket to her morning session, I decided that'd be a good time to tag along.

The room was nearly full when I arrived. We said a quick hello before the session began, then I found a seat in the back row and settled in to hear what she had to say. Abby was a very kinetic presenter, keeping the students engaged the whole time and encouraging them to share and discuss their ideas. It was a great way to warm into the day for the kids in attendance.

My second session was about telling life stories through poetic structure. I could only stay for part of it since I had to take care of some chaperone responsibilities, like knowing where the lunches were and helping our students find them. Right after lunch we visited a sizable book fair put on by The Red Balloon bookshop of St. Paul. While browsing, I found a stack of copies of Dan Geimenhart’s book The Honest Truth and added it to my stack. I felt pairing it with a bookmark I’d collected earlier for Brooks Benjamin’s My 7th Grade Life in Tights made a nice Middle Grade Minded traveling billboard to carry around for the rest of the afternoon. (I am nothing if not a supportive co-contributor.) 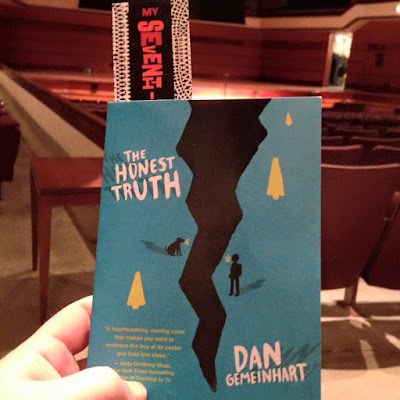 I had to pass on my original choice for the one session remaining after lunch due to a standing room only crowd in a small and stuffy classroom, and decided to find a quiet study corner in the hallway where I could start reading The Honest Truth instead. I had just enough time to get caught up in Mark and Beau’s story before the day was over, and we needed to collect everyone for the bus ride back to school. It was an amusing ride, because of the conversation I had with the student of mine who had been at Abby’s morning session with me. She hadn’t raised her hand to share the magical realism idea she’d worked on, so I asked what she had written about.

“I wrote about that thing you did that one time, with the lunch bag.”

“What thing I did that one time with the lunch bag?”

“You know, when someone forgot their lunch bag, and you wrote that thing on the board. I wrote about the stuff people forget at school when they go home, and then all the stuff has a party at night but the custodian finds out.” 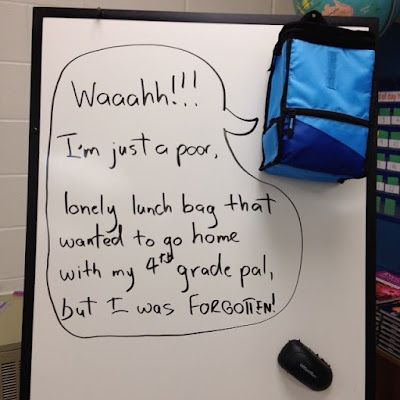 “You should’ve raised your hand!" I said. "She would have thought that was so cool!”

She paused and looked at me, somewhat suspiciously. “Why were you talking to her after?”

“Well, we kind of know each other.”

“We’ve known each other through Twitter for awhile, but this was the first time we’ve met in real life. So we talked a little bit.”

Finally I was able to impress a student.

I’ve chaperoned this conference four or five times now, and by far my favorite thing about it is always sitting in on the sessions and listening to so many creative and intelligent kids ask questions and share their ideas about writing. For someone who has spent decades on the front lines of public education, seeing such a heavy concentration of talent and enthusiasm congregate like that, and having the chance to witness it from the periphery, is truly inspiring. It gives you hope that despite all of the negative commentary about the electronic state of childhood in the 21st century and the broad criticism frequently directed at public education, there are still kids out there who can proudly own the label Best and Brightest.

It also reminds you that the stewardship of the yet-to-be-written books we’ll all want to read in the future is in very capable hands.
Posted by Tom Mulroy at 5:03 AM

I have to admit, I just got a little weepy thinking about that sweet girl's story and how such unique ideas can be born from the most ordinary days. All they have to do is be met with extraordinary imaginations. I hope to see that cool premise on the shelves one day! Definitely inspiring, Tom! Thanks for sharing!

"Wait: You’re saying…that you know…Abby Cooper?!” -- ahaha! This is awesome.

Kids are so amazing and so brilliant. I love your thought about the stewardship of yet-to-be-written books being in such capable hands. Wonderful!

Great story. You never know when an idea might turn into a novel.

What I loved about it the most was how it was exactly the kind of thing my 4th grade brain would have thought of so many years ago.

It's really an incredible day. With all of the young writers there, it just isn't possible that at least a few of them won't be published someday.

Exactly. And the great thing about kids is how they're usually a lot more open to trying out ideas without letting the inner editor stamp them out before they give it a try.