Follow Your Weird or The Recipe for Pirate Rock 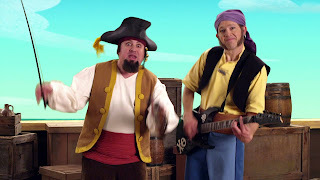 These two fun-loving sea rats create the music for my daughter’s favorite show, Jake and the Neverland Pirates. Each episode has songs woven into the adventure, and at the end, there’s a live-action music video starring Sharky and Bones, (Loren Hoskins and Kevin Hendrickson to land lubbers) all bandana-ed, bootstrapped, and obviously having a fabulous time.

The music is silly. It’s catchy. I listen to it in the car by myself sometimes. Why? Because what these two musicians do is pretty rad and exudes joy. Absolutely jam-packed with fun.

I recently started wondering...who are these guys? Who are Sharky and Bones? I assumed they were some LA studio musicians Disney contracted with or something. You know, the commercial jingle type looking for gigs to pay the rent until their post-industrial ska band took off for real.

Think again, matey! These two are PROFESSIONAL PIRATE ROCKERS. They aren’t even from LA! They began their pirate rock careers in 1999 in Portland, Oregon with the band Captain Bogg and Salty. One of them worked as an IT Support guy at his day job while rocking out at night. Did I mention that they’ve been writing pirate-themed music as a passion since Smashmouth encouraged everyone at my Senior High School Skip Day BBQ to become Allstars?

They weren’t just looking for a gig to pay the rent, they were following their own path. Performing the weird thing that they absolutely love to perform and doing it so well, with so much commitment and joy, Disney found them. Now it's their job - full time. And that’s why the music is so good. These are not two dudes trying to shoehorn their sound into some pre-ordered product, they are musicians who love pirate rock.

So, what does this have to do with writing Middle Grade? A lot I think. It’s so easy to get tempted by a trend in the market or write to an agent’s preference if you’re trying to snag one. But I believe that  your writing will shine the brightest if you just hold on like crazy to your weird thing. Your pirate rock. Be the best at writing the kinds of stories that live inside you - even if they seem too silly, or dark, or fluffy, or whatever.

So, don't you dare get down in the dumps, staring wistfully at the teenage vampire rom-com you poured your heart into. If that is your pirate rock - the thing that inspires you to sparkle and shine - keep writing it! Whatever it is, keep writing, keep loving your genre and get so good at it that the right avenue finds you. Sharky and Bones have become an absolute artistic inspiration to me, as funny as that might sound. I might even put an inspirational poster on my wall that says PIRATE ROCK SINCE '99 YA'LL.

Because, hey now, who turned out to be the real Allstars? These guys: 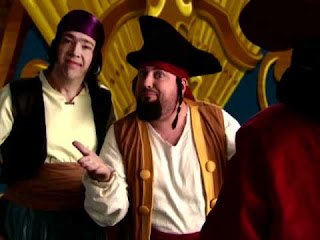 Yes! This! Cheers to everyone's own pirate rock!

That is an inspiring story, but I'm glad it didn't end with another middle grade pirate novel! I can NOT get my students to read anything with pirates, although I do annoy them frequently with singing silly songs!

Thinking about making a t-shirt! :)

Sharky and Bones can offer a virtual treasure trove of silly songs if you need inspiration!! :)

Mind. Also. Blown. Thank you for this!

You know the Senior Skip Day BBQ I'm talking about... :)

I love this! "Follow your weirdness" is one of my writing mantras. :D

Thank ye, kindly. Follow your weirdness. I can attest to the success of this strategy. What's a piratey way to say it? Hmmm.

Navigate by your own compass. You'll be less likely to get lost.