Book Review: A Song For Bijou 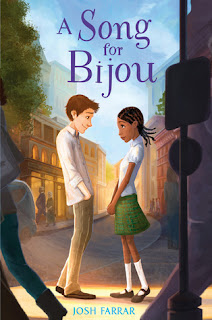 Life for Alex Schrader has never involved girls. He goes to an all-boys prep school and spends most of his time goofing around with his friends. But all that changes the first time he meets Bijou Doucet, a Haitian girl recently relocated to Brooklyn after the earthquake-and he is determined to win her heart. For Bijou, change is the only constant, and she's surprised every day by how different life is in America, especially when a boy asks her out. Alex quickly learns that there are rules when it comes to girls-both in Haitian culture and with his own friends. And Bijou soon learns that she doesn't have to let go of her roots to find joy in her new life.

Told in alternating viewpoints against the vibrant backdrop of Haitian-American culture, Alex and Bijou take their first tender steps toward love in this heartwarming story.

When I first found this book I cannot explain how excited I was. A middle grade book with Haitian character? YES!

Why was I so excited? Because I’ve been to Haiti, several times, and it’s a country that left a huge mark on my life. To see a cool looking, modern book for young people that represents that culture—was amazing. I was eager to see how it was handled, the voice, the culture, the history. But I was also so intrigued by the concept of a Haitian character in the United States and how she would cope.

Over all, I had HIGH expectations for this book.

Maybe that’s why I’m only giving it 3.5 stars. The idea behind this book could not have gotten better for me but I just didn’t quite relate to it. I didn’t connect.

Also, the entire plot is romance based which is a bit strange for middle grade. Not necessarily bad, just different. My problem with it was how the main character seems almost too focused on his crush. A hopeless romantic type character, I suppose. But from page one (okay, 2) he was in love with a Haitian girl he’d never met. He pretty much has zero goals or interests outside of meeting and impressing this one girl. I think it could have been cute, but his motivations felt unrealistic to me.

Diversity! This book is actually a few years old so it was doing diversity before diversity was a hot trend. It has some bits of Haitian culture and shows the differences between two people from very different backgrounds but also how they can relate to each other. I think the entire point of this book was opening the eyes of one boy to the diversity in the city around him which was REALLY cool.

Bijou: The main female character was a young Haitian girl. Her, I found much more relatable than Alex, the male lead. She was less interested in dating and more about her family. Though of course she warmed up to Alex, I found her hesitancy to be endearing.

Her voice was also handled very well. When we jumped to her perspective her thought processes and language ability were very obviously different than Alex’s, in a good way. English isn’t her first language and even though she speaks it very well, the subtle differences made her feel very authentic.

In all this is a cute read. Great if you’re looking for a culturally diverse story for young readers, just know that if your readers don’t want a straight romance—there isn’t a whole lot here to keep them reading. The cultural aspects are fun, but they aren’t really plot central, at least in the beginning, so it’s not enough to keep an otherwise uninterested reader interested.

Posted by Stacey Trombley at 4:00 AM

I read this book awhile back and thought it a charming story. I found your analysis interesting, though. I hadn't thought about whether it truly fits the MG niche or not. But, as a former 6th grade teacher, I think MG students would like it a lot.

Yeah I definitely realize my take is likely a bit subjective!