Last year I read and reviewed What The Moon Said, a really cool MG historical set during the depression. Well, Gayle is back with another historical MG novel that I'm super excited about!  Check out this the book and our interview with this up and coming MG author, Gayle Rosengren! 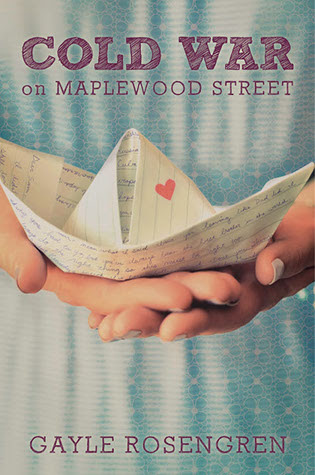 It's been a few months since her adored brother Sam joined the navy, but Joanna still misses him desperately.  Sam broke his promise that he wouldn't leave her, like their father did, so she can't help feeling hurt and betrayed and she refuses to answer his letters. But then President Kennedy appears on TV to announce that the Russians are bringing nuclear weapons to Cuba. That's a direct threat to the United States! He insists that the Russians remove the weapons at once, and he sends ships to the area to stop Russian ships from bringing more weapons in.  What if Sam's ship is one of them?
Joanna is frightened, and she's not the only one.  Parents, teachers, newscasters and people in countries around the world are scared, too.   How Joanna learns to live with hope in the face of fear is at the heart of this story about what it means to grow up in a world full of uncertainty, both then and now.

Find it on Amazon and Goodreads

Why did you choose to write historical MG?
It's not so much that I chose to write historical fiction; it just happens that these were the first two stories I felt compelled to write.  What the Moon Said was inspired by some events in my mother's childhood and Cold War on Maplewood Street stemmed from a major event in mine.  The story I'm currently working on is contemporary, and it's likely that will be the case for most of the stories that follow it.  I'm not committed to time periods, only to the stories I feel are important to tell.

What is your favorite thing about writing Middle Grade?

My favorite thing is knowing how much young readers take books to heart-- knowing that if they love my book today, they will probably still remember it fondly many years from now.  Middle grade books can make an impact that is uniquely personal because they're  the first books youngsters read on their own. They are also the books that usually start children down the road to being life-long readers, and that's something very special to be a part of.

What was your inspiration for writing?

When I was a girl, my family had very little money, which meant opportunities for entertainment were severely limited.  But thanks to libraries I always had books. They became an enormous part of my world.  I lost myself in them for hours every day.  Through reading I was whisked away to different places and different times and I made countless book character "friends." I liked some of them so much that it could be difficult to read the last page, knowing my time with them was coming to an end.  (Thank goodness I could flip back to the beginning and start all over again if I wanted to, and I often did!)  It was reading these books that fired my dream of someday writing books that would  mean as much to future young readers.

What scene was really hard for you to write and why, and is that the one of which you are most proud? Or is there another scene you particularly love?

The most challenging scene to write was the dinner scene with the Watermans.  There were a lot of characters interacting around the table, and there were several undercurrents that I wanted to establish. But since everything was being seen through Joanna's eyes I had to be careful not to make her too "knowing."  She had to see things without necessarily understanding all of what she was seeing--like the angry expression on uncle Zack's face, and Mrs. Waterman's tears as she flings her slice of cake into the garbage.
My favorite scene to write, though, was the one where Joanna turns her closet into a bomb shelter.  It was fun deciding what she'd put in it. It was also a transformative scene  that shows Joanna finally taking action, on her own, to feel safer.

What do you hope readers will take away from your book?

I hope they will see the importance of speaking up, communicating their feelings, especially when they're afraid or worried--just as Joanna eventually confides in her teacher and her mom and Sam.  Sharing our worries nearly always helps us to feel better..

What's your writing ritual like? Do you listen to music? Work at home or at a coffee shop or the library, etc?

I like to write on my laptop at my desk off the kitchen, with the coffee pot just a few steps away, my dog Fiona dozing at my feet, and my husband Don working at his own laptop nearby.  It's the coziest writing situation ever--quiet, and full of love and positive energy.

If writing is your dream, you must go for it with everything in you and never give up.  It took me a long time to be published.  I joke that I'm the poster child for perseverance. But that's what it takes.  Only a few people find success quickly.  For the rest of us it's a bit of an endurance test.  My best advice is to join a critique group of four or five other writers so you can help support each other and improve each other's writing.  Having a good critique group is probably the single most valuable part of a successful writing journey.  I know I couldn't have hung in there without mine.

What are you working on now?

I recently completed a contemporary novel about loyalty that has elements of mystery and suspense. It's Middle Grade, of course!

I can't wait to get my hands on this book! Gayle grew up in Chicago.  Like her main characters, Esther and Joanna, she enjoyed school, was an avid reader, and loved dogs and horses.  She majored in creative writing and philosophy in college and was the editor of the literary magazine


Gayle never outgrew her passion for children's books, though, and she worked in the  children's and young adult departments of a public library in Illinois for several years, enthusiastically sharing her love of books with young people while raising three young readers of her own.

Gayle eventually moved to Wisconsin, where she worked first in the reference library, and later as a copyeditor, at The Pleasant Company, where the American Girl books were published.  During this time she published short stories for children in Cricket, Ladybug, Jack and Jill and Children's Digest magazines.