As a Jewish author I was excited to see a book aimed at kids during the time of their Bar and Bat Mitzvahs (the ceremony in which a Jewish child enters into adulthood). It's an exciting and sometimes confusing time in a young Jewish individual's life. I would have loved to have had a book like this to see myself in during that time in my life. 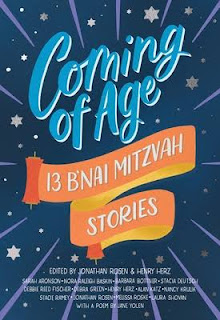 Coming of Age: 13 B'nai Mitzvah Stories is filled with vignettes about B'nai Mitzvahs and no two are alike. It covers everything from international experiences, pandemic bnai mitzvahs, exploring crushes, time travel, and even the Jewish customs on planet Latke with a race full of octopus-like aliens. And each story captures the range of emotions surrounding the important event in many Jewish children's lives as they are called to the Torah and transition into adulthood.
Whether you're Jewish or not, this is a great resource to help kids understand B'nai Mitzvahs in a variety of fun and interesting ways.
I have the pleasure of talking with one of the authors Nancy Krulik, about the anthology and some of the aspects of her story, The Contest.
Nancy it's so nice to chat with you today about Coming of Age: 13 B'nai Mitzvah stories.
Tell Middle Grade Minded readers a little bit about Coming of Age: 13 B'nai Mitzvah Stories and more specifically what your story is about.
Coming of Age: 13 B’nai Mitzvah Stories is a collection of stories about Jewish teenagers who are each havng having one of the most monumental and meaningful experiences of their lives—their bar or bat mitzvah. Some of the stories are funny, some are serious, and some are a little of both. Some take place in the past, some in the present day, and one even takes place in outer space. The one thing all the tales have in common is that they represent the true emotions 13-year-old Jewish kids feel. It is very much a book of shared experiences.  My particular story, T”he Contest,” is about a boy who has a very difficult time sitting still in synagogue.  He also has a whole lot of b’nai mitzvah to attend. So, to make things a little more interesting, he and his friends come up with a contest to see who can be the first one to be asked by the ushers to leave services.
How did you come up with the idea for your story? Have you ever been kicked out of synagogue before?
I was a bit of a chatterbox as a kid (I still am, but I can control myself a little better now).  I was definitely asked to leave services from time to time. But the whole concept of an actual contest is actually my son’s experience. The first line of the story is, in fact, the first line of his bar mitzvah speech: “Shabbat Shalom. Welcome to my Bar Mitzvah. Today I promise to make it all the way through the service without getting asked to leave the sanctuary.”  I was pretty mortified by that line when I first heard it, but the rabbi thought it was hilarious. Turns out the rabbi had a lot of trouble sitting still in synagogue when he was a kid as well.
How did you get involved in this book?
I met Jonathan Rosen, one of the editors/authors of the collection, on a trip to Israel sponsored by PJ Library. We traveled with a group of children’s authors, which was a remarkable experience. To see Jerusalem with people who are like-minded and care about the same things I do was very important to me. I’d been to Israel before, but never in this type of setting. I made lifelong friends, and Jonathan was one of them. We had all been thinking of ways to reach out to Jewish kids and Jonathan, along with Henry Herz, came up with Coming of Age. When they asked me to be part of a project as important as this one, I jumped at the chance.
What does it mean to you to be a part of a book that celebrates coming of age in Judaism?
I think it’s incredibly important for Jewish kids to see themselves in literature. It’s important for all kids to feel represented in the culture, particularly in books.  I think it’s also important for people of other faiths to understand what the experience is all about. I think the more we read about the lives and traditions of one another, the less hatred there will be in the world. Let’s face it, today’s 13-year-olds will be tomorrow’s leaders. So why not help them have pride in themselves and understanding for one another?
What do you hope readers get from this collection of stories?
I hope they laugh, and I hope they learn. As for Jewish readers in particular, I hope they take great pride in what they will have accomplished when they stand up at the bimah and read from the Torah. It takes a lot of work and a lot of guts to get up there in front of friends, family, and the congregation.
Is there anything else you'd like to share with readers about this story or your other work?
“The Contest” is actually the first Jewish story I ever wrote, and it has inspired me to play around with other ideas based on Jewish protagonists. Still, anyone who knows my books knows that I write funny. It’s just my thing. So although The Contest does take a serious turn, I kept it funny.  Kids who have read my Katie Kazoo Switcheroo, George Brown Class Clown or Princess Pulverizer series know no one loves putting a good burp into a story more than I do.  Kids who read “The Contest” will not be disappointed.
Posted by Jamie Krakover at 5:30 AM