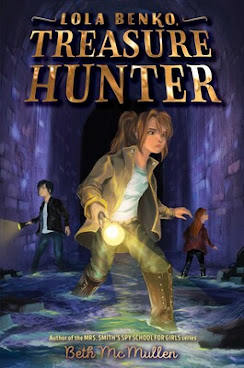 Lola Benko travels the world with her archeologist dad. She's used to hopping around the globe with no place to call home. But when her dad mysteriously sends her to live with her great-aunt Irma and is thought to have died trying to recover his next artifact, Lola swears he's still alive. She will stop at nothing to find her father even if it means getting caught stealing expensive art from a rich mansion. But if she's to uncover the truth she'll have to trust kids her own age and she's used to doing things on her own.

Lola is a fantastic character, she's into STEM and likes to invent things and dives in head first often without a plan which makes her lovable even in her mistakes. Unfortunately Lola Benko didn't have the world travels and Indiana Jones style treasure hunts I expected but it did have a lot of heart and some fun and sometimes unexpected middle of the night adventures that often went sideways before the characters were able to get themselves out of the mess created. Lola's friends Hannah and Jin are believable and help level and challenge Lola as a character. And the ending had a nice wrap up while also opening the door for the sequel.

I recommend to all middle grade readers looking for a little adventure with a side of mischief and fun that doesn't always go according to plan.

ARC generously provided by the publisher in exchange for an honest review.