Garbage Island (The Nearly Always Perilous Adventures of Archibald Shrew) by Fred Koehler is the kind of book that feels like a throwback to earlier days of middle grade literature and alarmingly contemporary at the same time. Archibald (he prefers to go by “Archie”) is all exploration, creativity, and invention, the kind of character that any STEM student will recognize in themselves. 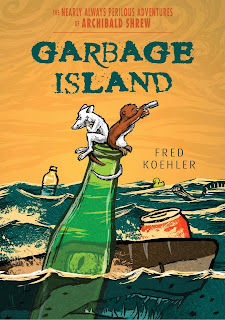 Archie is a shrew living on the Great Pacific Garbage Patch, which gives him a seemingly endless supply of resources to tinker with as he invents new objects meant to make the lives of those on the garbage patch a bit better. He shares the patch with a diverse collection of animals who have organized their different cultures and priorities into a workable truce under the leadership of their mayor, a mouse named Mr. Popli. While Archie’s strongest motivation for inventing is to be helpful, he commonly lets his enthusiasm get the better of him, which often leads to problems within this society. One day one of these moments leads to a chain of events that sets Archie and Mr. Popli off on an adventure at sea, one which could also have a lasting impact on the welfare of the citizens of Garbage Island and their home itself.

There were a number of things I enjoyed about this book. It was a lot of fun to read a story with animals for characters, and fully-realized characters at that. Each character or group had their own collection of traits and motivations working together to keep the story moving. The extensive world-building on display here was both amusing and disturbing — amusing because of the way Fred Koehler came up with imaginative ways to introduce everyday items as useful parts of the environment, but disturbing to realize that many of Archie’s abundant resources could likely be found out on the Garbage Patch in real life. The world-building didn’t stop with the physical though, but also permeated throughout the community the different animals had created together, to say nothing of their politics.

Fred Koehler won a Boston Globe/Horn Book Honor Award for his illustrations for ONE DAY. THE END. He is the author-illustrator of HOW TO CHEER UP DAD, which received three starred reviews, and he is the illustrator of THIS BOOK IS NOT ABOUT DRAGONS and PUPPY, PUPPY, PUPPY, and FLASHLIGHT NIGHT. He lives with his children in Lakeland, Florida. 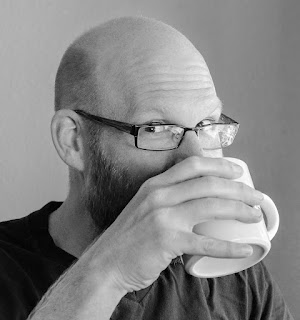