After Zero, by Christina Collins 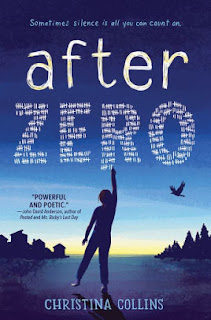 In After Zero, a debut middle grade by Christina Collins, twelve-year-old Elise finds it hard to utter more than a few words, especially when she is at school. At home, and with her best friend Mel, Elise is comfortable enough to speak freely. But at school, her anxiety takes over. Elise, formerly homeschooled, doesn’t know the “rules” about her new school, Green Pasture Middle. She’s never been in a classroom before, and every time she opens her mouth to speak, she accidentally spills secrets or says wrong answers. It’s easier not to talk. Elise carries a notebook full of tallies, each stroke marking a word spoken. Five tally marks isn’t bad. Two is pretty good. But zero? Zero is perfect.

At home, things aren’t much easier. When she’s not teaching an online class, Elise’s mother is locked inside her bedroom.One night when Elise can’t sleep, she discovers her mother rummaging through a shed in their backyard. Later, Elise discovers bins full of teddy bears, photographs, and sympathy cards inside the shed—evidence that her father was killed in a car crash on the day she was born. From the cards, it appears that her two toddler brothers survived the crash. When Elise discovers a card from a grandmother she never met, she’s convinced her granny is raising her brothers.

Armed with her grandmother’s return address, Elise sets out to meet her granny and the family she’s always longed for. After a dangerous journey through a forest, Elise approaches a cliff where she sees two boys in wheelchairs, playing violins. A grandmother figure appears and tells Elise that she will be reunited with her brothers on her 13th birthday if she remains silent. If she doesn’t say a word, all her wishes will come true.

Elise, determined to remain quiet so she can be reunited with her brothers, falls further into what she calls her “bubble”. She is silent to the point where can’t even bring herself to cry out for help when school bullies lash out, both physically and verbally.

When Elise can’t tell the guidance counselor why she didn’t cry for help during the abuse, a beloved English teacher encourages Elise to write a letter detailing all that has happened to her in the past few months. In the letter, Elise shares that she saw her brothers and will be reunited with them if she remains silent until her 13th birthday. The school counselor shows the letter to Elise’s mother, who is befuddled because Elise’s toddler brothers died in the same car crash that killed Elise’s dad thirteen years ago. The counselor explains that Elise’s silence, a condition called selective mutism, often co-exists with other types of anxiety. Elise’s sleep deprivation caused hallucinations, making her “see” the brothers and grandmother she wanted to believe were still alive.
And now, for the happy ending...

An epilogue shows Elise two years later, after therapy, entering high school. The word “Quiet” still feels inked into her like a tattoo. But like the mysterious raven that follows her throughout the story, Elise is now ready to spread her wings and fly.

My review: Four stars. Selective mutism is a topic not covered in middle grade literature, and this book will be a helpful addition to the genre. Although the hallucination scene was a bit confusing for me as a reader of realistic fiction, the gripping, fast-paced plot left me rooting for Elise. I appreciated the recommended resources at the end of the book for kids who struggle with selective mutism.
Posted by Unknown at 5:00 AM

I'm only on chapter 8 of this book but needed to know what happens so I can go to bed. As a mom, this hurts my heart so much to see how distant Elise's mom is and the pain she endures and how this all affects Elise.