Cover Reveal: VOICES FOR ALL: The Legend of ZoaBrio by Scott Vincent

Today we've got another great cover reveal! Author Scott Vincent told us a little bit about his debut Voices for All: The Legend of Zoabrio and gave us an exclusive look at the cover for the upcoming book. Find out more about Voices for All and make sure to check out the cover below!


Please tell us about your book
Voices for All is a middle-grade novel about a 12-year-old girl named Stacey who discovers the secret to communicating with animals. It’s a fast-paced, action-adventure story with humor, mystery, and touches of magic. It begins with Stacey visiting a zoo, and everywhere she goes the animals erupt into pandemonium. They recognize a pendant she is wearing as being the symbol of ZoaBrio, a legendary world where animals and humans lived together as equals. The animals think she is their savior. Stacey has no idea what the pendant means, nor how she got it.
Without spoiling the plot, Stacey soon learns to communicate with animals using a form of telepathy. This alarms a secret clan of cats and dogs that have sworn to keep that skill hidden from humans. Without human-to-animal communication, cats and dogs believe they will remain humans’ favorite companions. They are determined to keep Stacey’s discovery a secret, and Stacey must overthrow them before they silence her forever.
Stacey is joined by a boisterous gorilla who thinks he’s the funniest animal ever, a serious ocelot who rants about animal rights, and Stacey’s friend Alex, a boy who’s not fond of animals yet braves the ensuing chaos to help his friend.
Between the laughs and outlandish plot, this story is about friendship, understanding, freedom, and equality — no matter what your species.

Who illustrated the cover?
Leesha Hannigan. I’m a huge fan of her artwork, so I was delighted when she agreed to do the cover. I think she captured the three main characters perfectly. She also found a great balance between the story’s realistic setting, its funny characters, and its magical elements.

What inspired you to write this story?
I love animals and I’ve always wondered what it would be like to talk with them. I like to imagine animals as having their own silent language, much like mental telepathy. If you watch animals in the wild, you’ll notice they can coordinate without making much noise, so this kind of makes sense. I wondered, what if animals talk to each other but we humans are the only ones who can’t hear them? What if a girl discovered how to do that? What if that skill had been hidden from us humans for thousands of years by some sort of conspiracy? The story evolved from there.
I also had help and inspiration from my two kids. I originally started writing this merely to entertain them, but it quickly grew into something more. They provided plot ideas, and they requested (in some cases insisted) that I add certain things, which expanded the story as we went. When we started, none of us knew how the story was going to end. I would write a chapter, read it aloud to them, and they’d come up with ways to make it better. Writing with them was tremendously fun.

When will the book be released, and how can people learn more about it?
The e-book will be released on Amazon November 15th. Print paperbacks will be available soon after that. If anyone would like to start reading it now, I’ll happily send the first 9 chapters for free. That’s essentially the first quarter of the entire book. Anyone interested can visit my website at www.scottvincentfiction.com and enter an email address to tell me where to send the digital sample.

Please tell us about yourself
This is my first novel, so I guess that makes me a soon-to-be debut author. When I was young, my parents had a lot of animals, and I even worked at a zoo one summer when I was a kid. I enjoy reading fast-paced, speculative fiction that makes me laugh. This book is my attempt to put all that into a fun story about animals yearning to be free. I currently live in Southern California with my wife, daughter, and son. 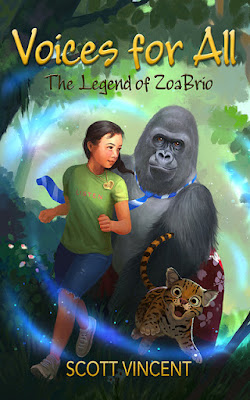 Blurb Description:
12-year-old Stacey discovers the secret to communicating with animals. Animals rejoice, thinking she is their long-awaited savior who can return them to a world where animals and humans once lived as equals. But not everyone loves a savior. A small clan of cats has kept this secret hidden from humans for generations, ensuring that dogs and cats remain humans' favorite companions. They are determined to destroy Stacey and keep her discovery a secret. Stacey must find and overthrow them before they silence her forever.
Voices for All is an adventure comedy about friendship, freedom and equality, no matter what your species. Join Stacey, her friend Alex, a wise-cracking gorilla, and a cast of animals yearning to be free as they fight for a world where animals are not as voiceless as we once thought.

About the Author:
Scott Vincent is a debut author who loves animals and likes to imagine what they are thinking. He grew up surrounded by a menagerie of different species, and worked as a zoo volunteer. Scott currently lives in Southern California with his wife, daughter, and son.

He can be followed online at www.scottvincentfiction.com and on Twitter via @ScottVincent65
Posted by Jamie Krakover at 5:00 AM