Sorry for that, folks. Apparently I hit my character limit on the title above so now you'll never know exactly what I was going to say. But rest assured...

It would've been cool.

It would've been amazing.

It would've Blown. Your. Mind.

Very much like the four books I'm going to spotlight today!

*humbly accepts award for most seamless segue ever* 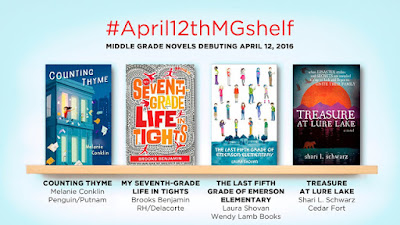 By now you've all heard about our #April12thMGshelf event. I've been lucky enough to pal around online with three brilliant middle-grade authors—Melanie Conklin, Shari Schwarz, and Laura Shovan—for a while and fall in love with their equally brilliant books. We each share an April 12th release date and for this leg of the event tour, I'm sharing a little bit of these stories with you in one of the art forms I love best.


First to the stage we've got Melanie Conklin's Counting Thyme. 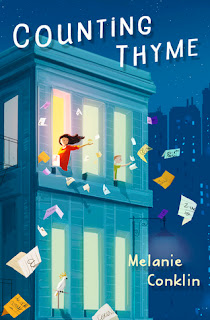 When eleven-year-old Thyme Owen’s little brother, Val, is accepted into a new cancer drug trial, it’s just the second chance that he needs. But it also means the Owens family has to move to New York, thousands of miles away from Thyme’s best friend and everything she knows and loves. The island of Manhattan doesn’t exactly inspire new beginnings, but Thyme tries to embrace the change for what it is: temporary.

After Val’s treatment shows real promise and Mr. Owens accepts a full-time position in the city, Thyme has to face the frightening possibility that the move to New York is permanent. Thyme loves her brother, and knows the trial could save his life—she’d give anything for him to be well—but she still wants to go home, although the guilt of not wanting to stay is agonizing. She finds herself even more mixed up when her heart feels the tug of new friends, a first crush and even a crotchety neighbor and his sweet whistling bird. All Thyme can do is count the minutes, the hours and the days, and hope time can bring both a miracle for Val and a way back home.

This book is all about family, hope, and perseverance. It's heartfelt. It's honest. It's just plain beautiful. So, naturally, the routine I chose for Melanie's book had to be one that I felt showcased the raw emotional power of dance. And what I decided on was "Fix You" featuring Robert and Alisson from So You Think You Can Dance.

Next up is Shari Schwarz's Treasure at Lure Lake. 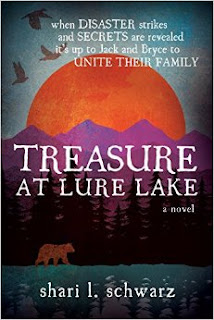 An epic adventure—that’s all Bryce wants this summer. So when he stumbles upon a treasure map connected to an old family secret, Bryce is determined to follow the map, even if it means risking his life and lying to his grandpa while they're on their wilderness backpacking trip. Bryce must work together with his difficult big brother, Jack, or they...and the treasure...may never see the light of day again.

This book took me back to my childhood when I first read My Side of the Mountain. Combine Shari's ability to yank you out of your seat and put you deep into the forests of the Rocky Mountains with the treasure-map goodness of The Goonies and you've got one special book. So for this story, I knew I had to choose a routine that blended fun and adventure. And what better one than a Sonya Tayeh routine that bridges the gap between fury and beauty? 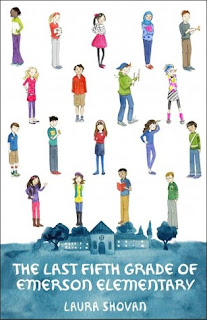 Eighteen kids,
one year of poems,
one school set to close.
Two yellow bulldozers
crouched outside,
ready to eat the building
in one greedy gulp.
But look out, bulldozers.
Ms. Hill’s fifth-grade class
has plans for you.
They’re going to speak up
and work together
to save their school.

This was the very first novel in verse I ever read. And it was the perfect one to start with because not only did Laura get me cheering for these kids on their quest to save their school, but she did it while allowing me to get to know every kid in the class. It doesn't get much more fantastic than that. So the routine I chose was an equally fantastic group contemporary piece all about lifting each other up when times are tough. 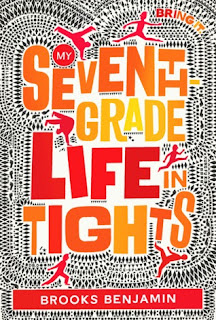 LIVE IT.
All Dillon wants is to be a real dancer. And if he wins a summer scholarship at Dance-Splosion, he’s on his way. The problem? His dad wants him to play football. And Dillon’s freestyle crew, the Dizzee Freekz, says that dance studios are for sellouts. His friends want Dillon to kill it at the audition—so he can turn around and tell the studio just how wrong their rules and creativity-strangling ways are.
WORK IT.


At first, Dillon’s willing to go along with his crew’s plan, even convincing one of the snobbiest girls at school to work with him on his technique. But as Dillon’s dancing improves, he wonders: what if studios aren’t the enemy? And what if he actually has a shot at winning the scholarship?


BRING IT.
Dillon’s life is about to get crazy . . . on and off the dance floor.

Okay, so this one's mine. And I love it so much. It's upbeat and fun and is all about friendship and being yourself and finding the moves that fit. Since my book is about dance, I decided to pick a fun routine that I feel the Dizzee Freekz would love to perform. Enjoy!

Now here's your chance to win all four of these books! Be sure to use every entry you can and don't forget to check out the other #April12thMGshelf posts below, too!

So much fun, Brooks. Now I'm getting excited for our books AND the new season of SYTYCD.

These are some great books and represent such a nice range of writing! Tragedy, poetry, mystery and dance! Who could ask for anything more?

Very fun post! And I'm so excited about these books!!

What an awesome and unique post! So much fun to see the dances. :) Also- what a fantastic giveaway. Thanks for giving all of us a chance to win these wonderful books.
~Jess

Love the dance sequences! So excited for all these books!

I want all of these!!They look so great!