Careful: Inspiration is sneaking up on you!

Fellow Middle Grade Minded Blogger Jamie Krakover recently wrote a wonderful post on inspiration and how asking "What if?" can be an amazing catalyst for our imagination.

That got me to thinking - How do I get inspired? Where are my ideas coming from?

For me, the process seems to take three routes: the esoteric, the stumble-upon-it, and the story I need to tell.

These are the ideas that are completely random. In my mind's eye they are swirling all around and seem to light on me like a butterfly.

In her book Big Magic, Elizabeth Gilbert argues that ideas are a "disembodied, energetic life-form", forever searching for someone to bring them to fruition (in whatever creative field you are engaged in, from knitting to writing to painting to gardening to whatever). 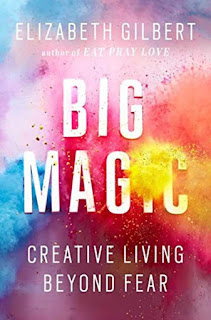 While this may sound crackers to you, there have been many occasions when an idea has simply "appeared", often almost fully-formed, begging for me to write it. Sometimes the result is good, sometimes not-so-good. In all cases, the not-so-good stories were because my heart wasn't quite in it. I still need to learn when to abandon an idea that doesn't quite do it.

Still the book I just finished (and am too superstitious to discuss yet!) arrived one afternoon without fanfare, but with great persistence. It followed me on my walks, it niggled at me in the shower, it directed me to a certain book, which when I opened it, led me to my character. And then it had the good grace to help me write it, including providing me with the elusive voice on page one. Sure, it needed revising and editing and all that good stuff, but I can only describe it as a gift. And truthfully, I felt more like the scribe, getting it all down, something I had never really experienced before.

I love the stumble-upon-it inspirations. These are the ideas that are gracious enough to present themselves in such a way that they are completely intriguing.

One amazing source of ideas is old newspapers (and I'm talking really old here). Last year I was looking for the obituary of my great-uncle, who died tragically in the early part of the twentieth century, when a story about a presumed murder caught my eye. (The murder was presumed because there was not yet a body). Suddenly I found myself going to the next day's paper on the microfiche, then the next. Each day's content was more fantastical than the last. The old adage that you wouldn't believe something could happen if you read it in a book was true in this case.

It also happened that the reporter could spin a yarn. In fact, it's my experience that old newspaper reporters wrote their stories in the most florid and excitable tone, a tone just begging to be fictionalized. While I have yet to write the book, it continues to percolate in the back of my head. Another idea I am currently exploring presented itself to me via Twitter. There are a few random historical and news sites I follow on twitter and when one of them popped up with a plaque from an historical site in England awhile back, I knew it was the name of one of my next novels. Since then, I've been researching and putting together an outline. This made me feel very cocky about my use of Twitter and has obliterated the guilt I sometimes associate with it, since it can be my way of avoiding real work...

The Story I Need to Tell

It's a Mystery, Pig Face! definitely falls into this category.

I'd always wanted to write a fun adventure story in the vein of Enid Blyton, Arthur Ransome, Harriet the Spy and that ilk.

I also always wanted to write about the neighbourhood I grew up in. Like kids everywhere, we were always hoping to stumble upon a mystery. If we couldn't find one, we were more than happy to make one up. This didn't always end well. Thus Tracy and Ralph and Pig Face's adventures were born. 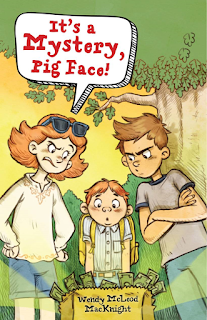 Two years ago I wrote the first draft of another MG novel during NaNoWriMo about a boy coping with a family loss and a discovered grave. I haven't returned to that book yet, and I suspect when I do it will be almost completely overhauled, but I needed to write it at the time because it was a family story that had been worming its way into my imagination for many years.

So that's my take on inspiration and ideas. If I could sum it up in two words it would be: PAY ATTENTION! Inspiration is always sneaking up on you. You don't want to miss it.


Now I'd love to hear your take on ideas and inspiration - do share!

Posted by WendyMcLeodMacKnight at 2:00 AM