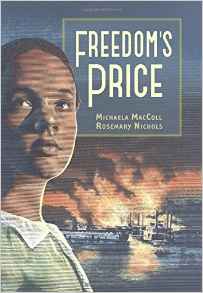 Eliza Scott isn’t quite a slave, but she’s not free either. She’s not a prisoner, but her family lives in a jail. Eliza, who attends a secret floating school on the Mississippi River because it’s illegal for her to read, says she understands how dangerous her situation is—but her parents know she’s not afraid enough. When a devastating cholera epidemic strikes the city, Eliza discovers she will have to be clever and resourceful to escape a slave catcher and the worst fire in St. Louis’ history. Will Eliza be willing to pay the price of freedom? Freedom’s Price is the second book in the Hidden Histories series, which examines little known moments in American history.

Your series sounds awesome! Tell us a little more: If you were pitching it to a MG reader, how would you describe it?

Hidden Histories is like lifting a rock off some of the dirty incidents in America’s past and taking a peek. Some unbelievably awful things have happened in our history and are not well-known. I take those incidents and weave a story from a kid’s perspective. The important thing is that I try to present all the points of view fairly.  Things that happened in the past can be incomprehensible to a modern reader – I try to show some context. In Freedom’s Price – I show all the different ways a black girl could exist in St. Louis – she could be free, a fugitive, a true slave or like my main character somewhere in between.

Wow. You totally hooked me! Tell me about what you like to read? What are a few of your recent favorite Middle Grade reads?

I really liked Like a River: A Civil War Novel by Kathy Reichman (Calkins Creek 2015) and Dash by Kirby Larson (Scholastic 2014).  They are both very different but they superbly do their job of enticing younger readers into history.

Tell us a bit about why you started writing Middle Grade and what your road to publication was like?

I originally started writing young adult. My books with Chronicle have all featured famous women as teenagers: Queen Victoria (Prisoners in the Palace, 2010) and Beryl Markham the aviatrix who grew up in Africa (Promise the Night, 2011). Then I started a literary mystery series using the same conceit a teenaged Emily Dickinson solving a murder based on a poem (Nobody’s Secret, 2012), the Bronte sisters investigating a mystery on the moors (Always Emily, 2013) and most recently Louisa May Alcott solving a murder that threatens her own family (The Revelation of Louisa May, 2015).

My middle grade writing started when I was introduced to Carolyn Yoder, my editor at Calkins Creek, an imprint of Boyds Mill Press. She was interested in historical fiction about America’s past but touching on themes that hadn’t already been written about.  Our first story was Rory’s Promise (Calkins Creek 2014) which is about orphan trains and is based on a true story in Arizona. And now Freedom’s Promise about Eliza Scott.

What are you writing rituals? Do you listen to music? Where do you write? Anything you must eat or drink? How long does it take you to write a first draft?

I love listening to music. I usually go for Baroque channels on Pandora.  I drink a lot of coffee. When I really need to get stuff done, I light one of my favorite candles (the best one smells like, and I do not lie, Heirloom Tomatoes).  I have an office at home, but in fine weather I like working on my deck.

I’ve taken four years to write a draft (my first and still unpublished manuscript). But now I have deadlines and a series to write. So I usually spend a month or two researching and thinking – then write a draft in 3 – 6 months after that.

What was it like writing a sequel? Scary? Fun? What are you most excited about with this new book?

Actually Freedom’s Price isn’t a sequel. It is a different story altogether from Rory’s Promise.  This series is meant to explore different time periods in American history.  Rory’s Promise was about an Irish orphan ending up in a remote mining town in Arizona. She travels there with the Sisters of Charity of NYC.  Rory as a character felt familiar and easy to write (I went to Catholic school). But Freedom’s Price is about a young black girl. That was an enormous challenge and so important to get it right. It was scary but I think it came out OK!

There is a huge difference between writing as a hobby and writing as a profession.  The further into the job you get, ironically you spend less time writing. You have to do marketing and social media. You have to take days to do school visits and book festivals.  If you’re lucky, your publisher brings you to conferences like NCTE and TLA.  But write we must – so we find the time.

Gr 5–8—History comes alive in this imagining of the life of Eliza Scott, one of the daughters of Dred Scott, the slave at the center of a landmark case in American history. This novel begins after the Scott family has sued their owners for their freedom and they're waiting to hear a VERDICT. The Scotts are forced to live in the St. Louis, MO, jail, and all of the wages they earn are held in escrow by the sheriff. Not much is known about the real-life Eliza, but these authors' depict her as brave, headstrong, and intelligent. She attends a secret school for black children where she has learned to read, and she longs for a different life than that of her parents. But it is her fear of being imprisoned that ultimately puts her freedom in jeopardy. Against her mother's wishes, Eliza takes a job with one of her father's former owners, Charlotte Charless. In the midst of the chaos and fear caused by a cholera outbreak, Eliza crosses paths with the greedy son of Charlotte, Mark Charless, who is desperate for money to fund his Gold Rush dreams. As her family is fighting for their freedom, Eliza's own struggle takes a more dramatic and immediate turn. Not shying away from some of the ugly truths from this part of our country's history, this book addresses slavery, kidnapping, and the overall appalling treatment of black people. While the characterization is well done, the dialogue is a bit stiff. Ultimately, however, this book is a compelling and exciting narrative as well as a window into a possible history. VERDICT A great choice to support school curriculum.—Heather M. Campbell, formerly at Philip S. Miller Library, Castle Rock, CO

Posted by Stacey Trombley at 12:00 AM