Often times in children's literature, books are labeled--by genre, by age group, and sometimes even by gender. Normally categorizing books helps the world know where the book belongs in a bookstore and who the intended audience is. But when you label a book as a boy book or a girl book it's not necessarily helpful; to the buyer or to the reader. In fact, it can sometimes do more harm than good. 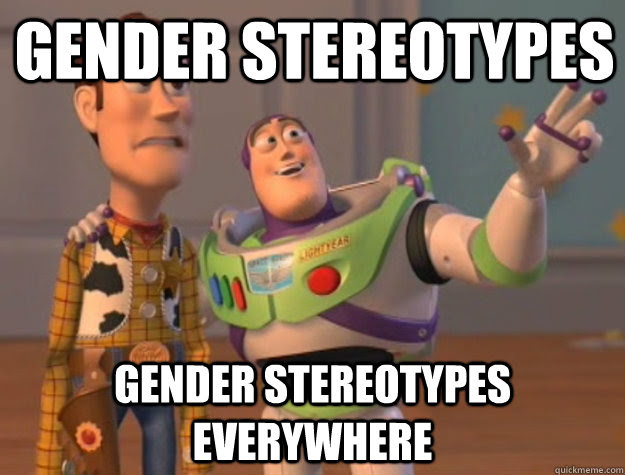 Labeling books for boys or girls can be problematic. It not only tells everyone who should be reading the book, but also who shouldn't. And I'm a firm believer that books are meant to be read widely and enjoyed often. By telling someone, especially a child, a book is a "boy" book when they might happen to be female, you are essentially telling that child it is not okay to read that book, that it's not okay to enjoy that book.

And I'm sure many are saying, so what difference does it make if boys don't read books about princesses and tea parties and girls don't read books about dinosaurs and firefighters, but the problem doesn't just stop at kids not reading certain kinds of books. You are instilling a sense of guilt in a child that may have had interest in a particular topic. You are telling a reader that it isn't socially unacceptable to read and/or like certain things because of who they are. And worst of all you are potentially turning kids off of reading.
When I was younger I didn't read much. Some of those years I didn't read at all. Not because I was ever told not to read something because of my gender, but because I was steered toward books that girls stereotypically like. The only problem is, I had no interest in them. I wanted to read books about space and aliens, gross science experiments and dinosaurs. Anything science related, or math or STEM. And even though there weren't tons of these books for kids, especially fictional ones, I was never once offered the ones that did exist. And I have to believe that was in part because I'm female, because it was not what my girl friends were reading.

Fast forward to today where I'm a female engineer in a largely male dominated field. To a time where I fight on a regular basis against stereotypes surrounding women in STEM. Where I constantly have to prove myself over and over again, and yet my fellow colleagues get handed things no questions asked. And where because of my name and field I am often assumed to be male. While I see things improving and changing, I look ahead and know we still have so far to go. That we are not yet at a point where we can unconsciously accept people and their abilities regardless of stereotypes, regardless of the labels we carry. And that we make snap judgements about others based on what society has told us should be.

Despite things slowly creeping toward a culture of acceptance and less classifications, each and every one of us still have moments where we unconsciously assume something about others. I know I've done this from time to time despite my best efforts. And often times those assumptions come directly from knee jerk thoughts we make based on someone's gender, race, religion, skin color etc. And yet we often don't even realize we are doing it because it is engrained in us, unconsciously. We've been told since a young age that something is just for boys or girls.
So what does all this have to do with reading and labeling books? By labeling books by gender, we pass on our own unconscious biases to the next generation. We are telling kids what they should read, what they shouldn't, and what are the right and wrong kind of books. We are telling kids what is socially acceptable to like based on their gender. Labeling books by gender is potentially damaging. It's instilling unconscious biases in kids so early on.

While some labels may be important, I don't think gender is one of them, especially not in books. Moving forward, we should encourage kids to read plain and simple. We should strive to find out each child's interests and direct him or her toward books that support those interests, male, female or otherwise. We should challenge our own stereotypes and unconscious biases and expose kids to books, all books, good books, bad books, "girl" books and "boy" books.

A world full of readers is a world full of people who challenge the "norm" that maybe shouldn't always be so normal. Readers are people who challenge themselves because they are exposed to a wide range of possibilities. We show them that things in the world aren't one or the other. That they can enjoy and do things regardless of gender. And that's a world I want to be a part of.
Posted by Jamie Krakover at 5:30 AM

I never label books I read (or write) but the business does, so I learned to do it for the pitch.
Of course it is not only an artificial construct, but it's reductionist. So are word-counts. But we learn to use the industry-speak, knowing all the while that it misses the mark somehow. That's every artist's dilemma.

It's true. And there's a fine line. I know why industry does it but I'm not sure they should. But you are right, it's definitely a dilemma.