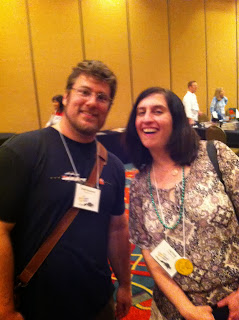 But if you're still wondering, the answer's yes.
Posted by Unknown at 3:30 AM

This sounds so fun! If you don't mind my asking, which synopsis got commented on?

The synopsis I donated to the please-read-me pile was my MG contemporary, My Seventh Grade Life in Tights.

There were so many awesome ones he read, though. Some where I even wanted to stand up and shout, "Can someone please publish that so I can read it already?"

But I didn't. Because I'm pretty sure that would have been bad form.

What a great experience for you Brooks! Conferences are so fun and full of great people. And that's awesome about your manuscript going for a closer look to Josh Adams. Good luck!

I'm already packing for next year. I just hope I don't grow out of my shoes before then...

Your first conference experience sounds similar to mine. I was a bit overwhelmed at first but I learned a ton and met some really awesome people.

Congrats on the agent interest. That's awesome! I have my fingers crossed for you.

I love this!! (Except maybe that picture of me...yikes! Maybe you should've just turned us into characters from Ghostbusters. ;)

I think my hand fell off from fast note-taking during one of Jordan Brown's sessions. So much good info!

Fingers crossed for you on the agent interest!

It was so funny--I was walking around, just sort of absorbing the experience when Gail found me. She ended up introducing me to everyone (literally--she knows everyone) which made things a little less scary for me.

What?! That picture's awesome! I think it shows our true personality. Goofy, a little crooked, and slightly blurry from the 3 hour drive to Nashville.

As far as the agent, I haven't sent anything yet. I'm still reworking the ending. As soon as I'm finished with this pass, I'll be begging for some people to help me slice the sucker up!

I NEED to attend a conference with you.....the level of need is so high its bursting

You ain't kiddin, man! Do you have any coming up you're going to? They're sort of sparse down here near TN, but I know they pop up all the time in the NE and out west.