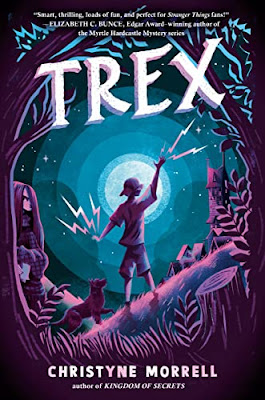 Those of you who are fans of Christyne's last book, KINGDOM OF SECRETS,  are in for a treat! I had the opportunity to read an Advanced Reader's Copy and it is a PAGE-TURNER!

Trex’s experimental brain implant saved his life—but it also made his life a lot harder. Now he shocks everything he touches. When his overprotective mother finally agrees to send him to a real school for sixth grade, Trex is determined to fit in.

He wasn’t counting on Mellie the Mouse. She lives in the creepiest house in Hopewell Hill, where she spends her time scowling, lurking, ignoring bullies, and training to be a spy. Mellie is convinced she saw lightning shoot from Trex’s fingertips, and she is Very Suspicious.And she should be . . . but not of Trex. Someone mysterious is lurking in the shadows . . . someone who knows a dangerous secret.

Q:        First of all, I LOVED TREX! Can you share with our readers where the original idea came from? It is so good!

A.                  Thank you! This is a bit spoilery, but the idea came to me one night after a neighborhood party. I left early to put my daughter to bed and immediately fell asleep beside her. Being an introvert, all that socializing had worn me out! When people asked where I’d gone, my husband said I had to go inside and “recharge my batteries,” which got me thinking… what if I literally had to recharge my batteries? Then I took it a step further, envisioning a character who physically manifested the traits of an introvert. In addition to having to recharge, Trex is uncomfortable in social settings as a result of his condition, and because of his static shock, he keeps other people at a distance. The rest of the story came together from that initial spark (pun intended 😊). Needless to say, I’m so glad I ghosted that party!

Q.        The characters of Mellie and Trex are so real. How much pre-work did you have to do before writing the book to really get your characters?

A.                  I didn’t do much character pre-work, unless you count awful early drafts! I’m a plot-first writer, so I always start by making detailed, beat-by-beat outlines of what’s going to happen. I know the basics about my characters when I start drafting, but I don’t really get them until I’ve had a chance to spend time with them, which usually happens around the third or fourth draft. Then, in drafts six or seven, I layer in all the little details I’ve picked up along the way, which hopefully make the characters step off the page.

Q.        The multiple points of view — including some adults — is so well done and really adds to the plot twists. Was that always a decision from the get-go?

A.                  I’m a sucker for a multiple-POV novel (or a glutton for punishment), so yes, the three narrators were present from the beginning. It was challenging to juggle all those perspectives, but I wanted to examine the secrets people keep and the lies they tell (to themselves and to others). To do that, I had to get into the characters’ heads and let each of them have their say.

Q.        If someone asked me to describe the story, I’d say Mission-Impossible-Meets-Harriet-The-Spy, how would you describe it?

A.                  Ooh, I like that! I usually describe TREX as a sci-fi-adventure mystery, because it contains a little bit of everything. As I was writing it, I was reminded of the classic 80s movies of my youth, like E.T. and Flight of the Navigator - stories about outcasts with abilities being exploited by big corporations. Or, more recently, the series Stranger Things, with the appearance of a mysterious newcomer who has unexplained powers caused, again, by an evil corporation (but minus the terrifying demogorgon). I’d also compare it to my favorite books with unreliable narrators, like Liar and Spy by Rebecca Stead. So some combination of all those things!

Q.        There are a LOT of trust issues in this book and I love that, because learning who to trust and not, and learning to forgive others’ mistakes is so important for kids to learn.  Was that purposeful from the beginning or did it evolve as you wrote?

A.                  The trust element evolved organically as I wrote. From the beginning, I was focused on the twin ideas of secrets and lies, and I fleshed that out with three main characters who all have something to hide. I was particularly fascinated by Mellie, who “collects” other people’s secrets while simultaneously denying her own. That central theme naturally lent itself to an examination of trust and how it’s gained and lost - how being dishonest, even to protect yourself or someone else, can be harmful. I agree that this is an important topic for kids at this age, especially as it plays out in the parent/child relationship. There’s a line in the book that I wrote early on and kept returning to, which I think captures this concept well: “[He] has every reason to hate me. For all the secrets. For all the lies. And worst of all, for not knowing the difference between the two.”

Q.        Likewise, anxiety is addressed so well. We really feel for Mellie. How much research did you have to do to get that so right?

A.        A lot! First, I read everything I could find about anxiety in kids; then I tried to balance the more clinical perspective with first-hand experiences - both my own and those that were shared with me. At the root of this story is my own background with introversion/anxiety, and as I began to circulate early drafts to friends and beta readers, I discovered that my experiences were not uncommon. The number of people who revealed that they and/or their kids mistook anxiety for gastrointestinal issues, or could otherwise relate to Mellie, made me more determined to get this book into the world.

Interestingly, getting it “right” in terms of authenticity occasionally meant getting it wrong. At the beginning of the book, Mellie has a number of misconceptions about her anxiety and her medication. They’re corrected by the end of the story, but they reflect many of the personal experiences I heard. The same is true of the way Mellie’s parents approach her situation. They initially seek a quick fix for her anxiety but eventually realize that an honest discussion and acknowledgement of the issues are critical to a long-term solution.

A.              Absolutely! Mellie insists upon it, and she always gets her way. I picture them bickering and playing Alphabetter* for their entire lives!

*Alphabetter is a game in which you take turns naming your favorite things in alphabetical order, with extra points for multiple words starting with the same letter (e.g., chocolate chip cookies).

Q.        Your first book, KINGDOM OF SECRETS, was a fantasy. TREX is a mystery/adventure story. What’s next?

A.        I’m working on a ghost story, believe it or not. My agent tells me I have “range,” which I think is a kind way of saying I have a short attention span. I love to explore new genres and styles with each book, but I try to incorporate a common spirit of adventure, friendship, and self-actualization into each one. Oh, and plot twists - those are my favorite!

Want to learn more about Christyne and her books? Visit here!

Posted by WendyMcLeodMacKnight at 1:30 AM