Amari and the Night Brothers Review 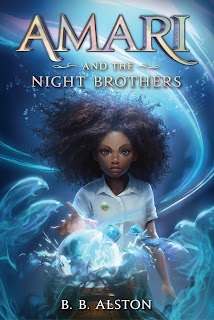 When Amari gets kicked out of school for fighting with a kid who teased her about her missing brother, her mom has no idea what she will do for Amari's education. While Quinton’s disappearance is mysterious, most people think he got involved in something illegal and is probably long dead. Amari knows her brother was too smart to do anything like that but no one believes her. Until a magical briefcase shows up and has a message for Amari, from her brother.

The cryptic message leads her to the Bureau of Supernatural Affairs, a secret organization that trained Quinton and hired him to investigate supernatural happenings including chasing down evil magicians. Amari is eager to join the Bureau with the sole purpose of using her time to investigate her brother's disappearance and find him. But when her initial evaluation yields an unexpected result, she is thrust into another situation that makes her painfully aware of how hard it is to be different, and from a background that isn't appreciated. Amari struggles to prove herself, so she can continue to look for clues to save Quinton while navigating an unknown environment with an evil magician bent on punishing the supernatural world. But if she can't solve the mystery of Quinton's disappearance before her training runs out, she'll be back home with her memory erased and no closer to rescuing her brother.

Amari and the Night Brothers contains a magical and imaginative world with a wonderfully diverse cast that you want to dive right into and never stop turning pages. Amari is a strong main character who has been brought up in a world where the system is stacked against her. She is painfully aware of the hurdles in front of her because she is poor and black. Despite the constant roadblocks, Amari rises to the occasion and even when she wants to quit she reminds herself what her brother would do in that situation. She continues to push ahead even when tempted by a seemingly easy road that would sacrifice her internal moral compass and lead to terrible path. Ultimately nothing stops her from standing up for what she believes in. And it’s wrapped up in a story filled with surprises and intrigue at every step along the journey. The themes are so beautifully woven into the adventure and mystery and the story demonstrates the importance of having role models and allies along the way.

This is the first book I’ve read in a while that was hard to put down. I can’t think of anything that I didn’t like about the story other than it ended far too soon. Amari and the Night Brothers is the next big thing. It will be a HUGE series for young and not-so-young readers alike. Make sure you get your hands on it ASAP, because everyone will be talking about this book. I can’t believe I have to wait a whole year for the next installment because I’m ready to dive into this world all over again. 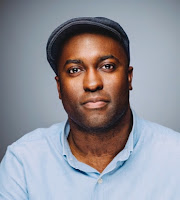 B. B. Alston started writing in middle school, entertaining his classmates with horror stories starring the whole class where not everyone survived! After several years of trying to break into publishing, he had just been accepted into a biomedical graduate program when a chance entry into a twitter pitch contest led to his signing with TBA, 20+ book deals worldwide, and even a film deal. When not writing, he can be found eating too many sweets and exploring country roads to see where they lead.

B. B. was inspired to write AMARI AND THE NIGHT BROTHERS because he couldn’t find any fantasy stories featuring Black kids when he was growing up. He hopes to show kids that though you might look different, or feel different, whatever the reason, your uniqueness needn’t only be a source of fear and insecurity. There is great strength and joy to be found in simply accepting yourself for who you are. Because once you do so, you’ll be unstoppable.

Posted by Jamie Krakover at 3:00 AM