Interview with Jeff Rosen, author of CALEY CROSS AND THE HADEON DROP And GIVEAWAY!

I recently had a chance to read author Jeff Rosen's new middle grade novel, CALEY CROSS AND THE HADEON DROP. 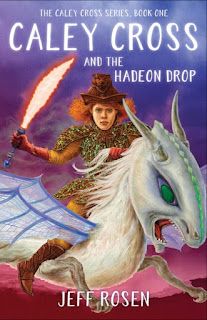 Caley Cross has always known she's not a “normal” thirteen-year-old (her ability to create zombie animals was her first clue). Still, she never expected to be whisked off to a faraway world―Erinath―where she is Crown Princess and people have “baests” that live inside them, giving them fantastic, animal-like powers. Which would be cool, except that Caley’s baest turns out to be an ancient monster that can swallow planets. Despite this, Caley manages to make the first friends of her life, Neive Olander and Kipley Gorsebrooke. They help her navigate the Erinath Academy, where students train to compete in the annual―and deadly―Equidium contest, flying giant, dragonfly-like orocs. But to add to her usual (bad) luck, an evil “Watcher” known as Olpheist is seeking her, anxious to retrieve something that will make him immortal. The first in an epic fantasy series from Jeff Rosen that will keep readers laughing and on the edge of their seats.

Hi Jeff! Great to read a book from a fellow Maritimer! Before we talk about the book, I need to ask: what made you decide to write a middle-grade novel?

First of all, thank you for the great questions. You actually read Caley Cross!  As a writer, the best thing a reader can do is read your book.

Writers often get into a “genre” groove and generally stay in their creative lane.  Mine has been preschool series creation and comedy. But there were themes and thoughts swirling in my skull for a while I felt would be best expressed in a book for middle-grade readers. They experience books deeply and profoundly and are generally less cynical than adults. I felt the things I wanted to write about would resonate with them. When I began to work on Caley Cross and the Hadeon Drop, I was becoming increasingly distressed at some of our Homo sapiens shenanigans. For example, our relationship (often toxic) with the natural world, and specifically our treatment of animals who we regard as property. In Caley Cross, people have “baests” living inside them that give them fantastic animal-like powers. I tried to imagine a world where animals are our equal, and inform our behavior, and what would happen if they ever decided to get even. More of that in the next book!  I was also thinking about the rise of populism and totalitarianism and how it can insidiously creep into cultures. Plus, kids need a good laugh these days.

CALEY CROSS AND THE HADEON DROP is pure fantasy adventure. Did you read a lot of fantasy growing up, and if yes, what were your favourites?

Oh, yeah. I devoured books. I lived inside of Tolkien, Hitchhiker’s Guide to the Galaxy, Vonnegut, Shakespeare, Hardy Boys...  and Mad magazine. Also, my actual life was mostly fantasy. For example, when I was 5, I was living (mostly alone) above a lingerie shop in Montreal. My bedroom had bars on the window and was full of headless mannequins. I roamed the streets, without adult supervision, bought a dog with stolen money, ate frozen dinners I cooked for myself, threw parties no one came to, and never went to school. Like an animal! That’s probably a story for another interview...

In the time-honoured tradition of putting our main characters in the worst situations ever, you start the book off with Caley living with The Gunch. How fun was it to write that character?

Naming her was the most fun!  When I thought of “Edwina Gunch” I smiled for a whole day. All self-respecting villains need a good name; The White Witch, Voldemort, Uriah Heep, Long John Silver, Satan, Trump...  Anyway, the Gunch runs “The Gunch Home for Wayward Waifs” which is basically a government-funded orphan sweatshop where Caley lives at the start of the book. The Gunch is phenomenally cheap, vain, and cruel. She once used Caley’s arm as a pin-cushion and feeds her seed she makes her steal from the neighbor’s bird feeder. But Caley is not a totally innocent victim. She is a bit of a zombie-raiser and seems basically to be haunting/slowly driving the Gunch insane. It was also fun creating mildly sadistic scenarios between the two... some based loosely on my own life. Maybe “fun” is the wrong word. Therapeutic?

Caley’s powers are, to say the least, interesting! Did you always know what kind of powers she ought to have and what made you pick the ability to raise things from the dead? (which, by the way, is deliciously creepy).

It’s strange because very early on, I knew Caley could raise dead animals. I didn’t know why or what the source of her power was, and it only revealed itself to me months into writing. (*Hint: the clue is in the title.) Caley Cross also has a planet-swallowing monster living inside her... which makes her someone you probably don’t want to cross (pardon the pun.) Why dead animals? Part of it was inspired by my horror over how we treat living animals. Caley feels animal's pain deeply, and part of the power she possesses is to bring them back... to resurrect them... but only the ones who have been mistreated. And they kind of exact their revenge.  So her ability can be seen as positive or negative, depending on how it affects others; bad for people like the Gunch, not so bad for zombie animals (although debatable.) How Caley sees her power and utilizes it becomes a central conflict in the series; the struggle to identify herself as either good... or evil!

The world-building in the book is top-notch. Do you think that your work in television and your career as a visual artist gives you a leg up when writing scenes and adding detail? I could totally see the characters!

Love this question! It was more challenging than I thought it would be, to be totally honest. In TV and film writing you use a kind of shorthand to describe characters and settings. It’s as lean as possible. Nobody wants to read a bunch of boring description in a script. The shorthand works in visual mediums because as a creator you can then oversee the artists and directors and the whole filming process to express your vision. It isn’t enough info for a book reader. Some of the early editorial feedback was that readers felt I tended to write less than was necessary to really get a good feel for the environments and characters. So this was a big learning curve for me.

I love the idea that every character has a monster inside them (isn’t that true!). Are you willing to share what yours is?

Hmmmm....  I suppose it’s a vampire poodle. We actually have a vampire poodle, named Vlad. Here is a photo of him with a recent victim. As you can see, all light is sucked into him. Please to enjoy. He biiiiiites! 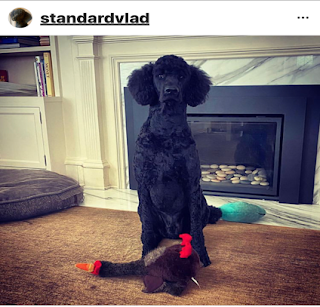 There’s a lot of drama and danger AND a lot of humour. How did you balance that in telling the story?

Honestly, it was not that difficult because that is exactly the makeup of my inner life (drama/danger/humor). I write what I know.  I have always felt there isn’t enough humor in MG books – they can be quite dry and earnest. Caley Cross has a very sardonic, bleak outlook, but also a kind of gallows humor  – that’s the way she has survived. (She and I have a few things in common.)  I wanted the book to largely be a comedy, but the drama and danger kept creeping in.  You can’t control your creations!

I'm not going to give away any of the plot, but I will say that CALEY CROSS AND THE HADEON DROP feels like the love child of HARRY POTTER, THE GOLDEN COMPASS, and STAR WARS! When can we expect the next CALEY book to drop?

That is exactly how I would describe the book!  (With a bit of Monty Python thrown in.) As for the next installment, I am working on it...

Thanks for taking the time to answer my questions for our Middle-Grade Minded Blog readers, Jeff!

You are most welcome. It’s been my absolute pleasure!

And art stuff at http://jeffrosenart.com/

Want a chance to win a copy of CALEY CROSS AND THE HADEON DROP? Leave a comment below before November 9th at midnight and you'll be entered for a chance to win! Good luck!

Posted by WendyMcLeodMacKnight at 10:30 PM