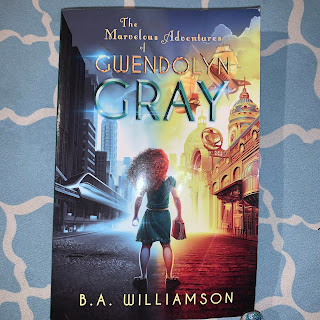 Thank you to Jolly Fish Press for the review copy of
The Marvelous Adventures of Gwendolyn Gray, which I received in
exchange for an honest review.


OK, to be clear, Jolly Fish Press actually sent me two Gwendolyn Gray books;
the more recent one having come out in April. But ever since I graduated from
The Babysitters’ Club, reading a series out of order has never been good to me.


Redhead, imaginative Gwendolyn Gray is a black sheep in her dystopian City
because she has pizazz and personality. But when characters from her
imagination and a mysterious book she finds start manifesting, Gwendolyn
finds herself pursued across universes by pirates, a giant octopus, and
nefarious government agents, the Mister Men.

The omniscient narrator (AKA the death of so many kidlit manuscripts) adds
comic relief and wisdom to the story simultaneously.


Easter eggs from myriad iconic fantasy stories - Alice in Wonderland,
Neverending Story, Wizard of Oz, and The Matrix most prominently - are
sprinkled throughout, with a dash of kid-friendly multiverse physics, a twist of
first love, mind-bending gotchas, and a bittersweet tearjerker ending.


But this isn’t a spoof book, or even intended to be funny: This sci-fi adventure
story has a strong message of confidence and self-love that really sucks the
reader in. I’d gone through 100 pages before I realized I’d done so.

In other words, the premise is awesome and B.A. Williamson totally delivers.


While it sounds like Williamson is an educator, his descriptions of corporate
life had this Corporate America cog ROFL.


Caveats:
There are a couple scenes of bullying toward the front of the book, including
one where Gwendolyn is threatened and has a chunk of her hair cut out.

At 325 pages, this book is the poster child for the “we need to distinguish
Upper MG from MG” chatter floating around on writing Twitter. In other words,
read this book TO a reluctant reader, but don’t give it to them.


The Marvelous Adventures of Gwendolyn Gray is available now.
Posted by Kelly (Kidlit Underground) at 3:45 PM

I have seen this book around and it looks and sounds awesome. Love the cover! Glad to hear it sucked you in and you were 100 pages in in no time. That's always a good sign. :) Thanks for sharing!