Author Interview and Giveaway: Claire Fayers, Author of THE BOOK OF UNWYSE MAGIC


I'm thrilled to introduce you to the most delight middle grade fantasy! 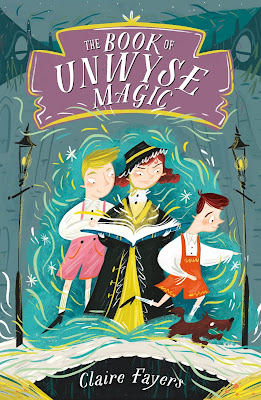 The town of Wyse, set precisely on the border of England and Wales, is remarkable for one thing: it is the only remaining human town where magic works.
When twelve-year-old Ava and her brother return to their birthplace of Wyse, they discover that their once magical town has been losing its charms under the control of Lord Skinner. Uncovering a working magic mirror, Ava opens an unauthorized link to the twinned town of Unwyse, where she meets Howell, one of the unlucky Fair Folk who is being pursued by the terrifying Mr Bones.
Discovering that they are the joint guardians of a grumpy old book that can tell the future, the new friends are unexpectedly launched headlong into an adventure to uncover the mysterious link between Mr Bones and Lord Skinner, and to find out what's happening to the waning magic that connects their two worlds.

First of all: I LOVED this book!  Can you share the inspiration?

Thank you so much! The first germ of an idea came when I was having a meeting with my agent and she said she’d love to see a Middle Grade Jonathan Strange and Mr. Norrell. And I, without thinking, said ‘I can do that!’

Of course, then I had to deliver on my rash promise. I began with an image of a carriage stopping in a shabby street outside a set of magical souvenir shops. Who was in the carriage? What were they doing here? And where was this place?

That was the start of the town of Wyse. There’s a river called the Wye not far from where I live, and it’s on the border of England and Wales, so the name of the town and its location came very quickly. Everything else took a lot more work!

The title of the American version is different from the Canadian and UK versions – can you explain?

This is one of those publishing decisions that people generally don’t know about. It took a long while to decide on a title for the book, and the UK finally decided on Unwyse Magic while the US wanted The Book of Unwyse Magic (which I was very happy about.) But then the UK team discussed the title, and the cover, with booksellers, and they found it wasn’t as popular as they’d hoped. So they redesigned the UK cover, and changed the title to Mirror Magic.

I love both titles, and I’m very grateful to my UK publisher that they put in the time to do a complete redesign. It made me appreciate again that creating a book is a real team effort, with large numbers of people working behind the scenes.

One of my all-time favourite books is Mr. Norrell and Jonathan Strange, and your book felt like a middle grade version of that book, because the magic is so well thought-out and the world-building so strong. How did you go about doing the world-building? Any hints?

Aha! I’ve been rumbled! I love Jonathan Strange and Mr Norrell for its mix of historical realism and magic. I did quite a lot of the world-building in edits, because my lovely editors kept asking me awkward questions about how the world and magic worked. (You can short-cut this by asking yourself awkward questions, or getting a friend to do it.)

I started off with a few basic ideas. A human and a fairy town, joined by magic mirrors. Magic running out. Each town ruled by a sinister figure. I found it useful to have a ‘type’ of a place in mind. Wyse isn’t a real town, but it’s based on the small market towns that you get along the borders. There are also a lot of British seaside towns which were the height of fashion in Victorian times but are now often quite run-down. Everything is tied to that feeling of faded grandeur and I think that gives the world a sense of consistency.

So, invent a few details, keep asking yourself why the world is this particular way, decide on a unifying theme, and do lots of rewriting!

There are some excellent, and subtle, lessons in this book. For instance, Lord Skinner is not who he appears to be, and has enchanted his fellow citizens into thinking he is a fine gentleman. Any inspiration there?

Mentioning no names, yes! It’s inevitable, I think, that when you’re writing a book, you are influenced by what’s going on in the world. There are many people like Lord Skinner, who use money or power or charisma to convince everyone that they are good, decent people, when underneath they are far from it.

The mirror image of that is when people turn on other people who are a bit different. The humans in Wyse are afraid of the Fair Folk because they are magical, and they treat them badly, but it’s always better to be shaped by our kindness than our fears. Standing up to fear is a big theme in the book.

I love Ava and Howell’s characters – they are so real to me, and their regrets and fears are important factors in their successes. What is your character-building process like?

It’s random and full of mistakes. It took me a long time to get Ava and Howell right, and they had to be just right because they’re such important characters.

I usually start with the easy things – age, appearance, where they come from. Then I jump straight to the most difficult questions – what do they want and why do they want it? My characters must start out unhappy in some way, and they must change through the story.

A lot of this comes out as I’m writing. I’m quite bad at planning and I prefer to jump straight in and write a whole load of different scenes to see what will happen. I keep a separate document with character notes, which I fill out as I write, so when I do the second draft I can make sure that all the details are consistent. (You don’t want a character suddenly changing age or hair colour halfway through.)

And finally – THE BOOK! The book is one of the cheekiest characters I’ve read in a long time. How much fun was it to write from its perspective?

The Book is one of my favourite characters. I’d written chapter headers in my previous books (Voyage to Magical North and Journey to Dragon Island.) This time, I wanted to tie the headers more firmly into the story and the best way was to have them written by one of the characters. And so I came up with a magical book.

Because The Book had been around for a long time, it would be far too easy for my heroes to ask it what was going on, so I put in a couple of restrictions. The Book can only tell you about the future, it can’t tell you what happened in the past. And its magic is glitching so its predictions are accurate but not always useful. You probably don’t want to know when the safety pin will be invented, for example, when you’re trying to escape from terrifying skeletons.

The Book is also very grumpy, (it was dropped in the bath once and has never recovered). I love writing grumpy characters – I don’t know what that says about me!

Read everything you can get your hands on, and read with your writer’s hat on. If you find a character you like, ask yourself why. If a plot twist catches you out, take note of how it’s done. Then write – there is really no substitute for sitting down and putting words on paper.

Your world should feel like a real place to you. Draw maps and make loads of notes on every location. But when you’re writing your book, the world must be filtered through the eyes, ears and thoughts of your characters. Don’t expect to get it right on the first draft. With the first draft, you’re discovering the story for yourself. Once you have that rough draft you can go back and do it properly.

My fourth book is already out in the UK. It’s called Storm Hound and it follows the adventures of one of Odin’s ferocious hunting hounds who falls to earth and finds that he’s shrunk to the size of a very cute little puppy. He’s adopted by a local family and has to contend with cats, vets and obedience classes. But his fall has been noticed and dark magicians are closing in…

I’m still not quite decided on my next book. I’m torn between three different ideas and I’m working on them all. I’ll be sending proposals to my agent soon, so keep your fingers crossed for me.

Thanks so much for having me on MG Minded. It’s been great fun talking to you. 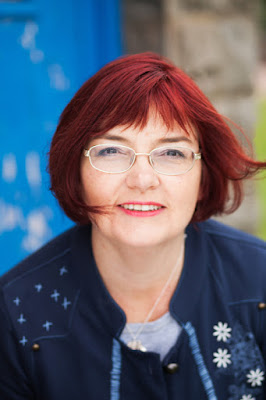 Want a signed copy of The Book of Unwyse Magic? Leave a comment below before February 28th and you're entered for a chance to win!

a Rafflecopter giveaway
Posted by WendyMcLeodMacKnight at 2:03 AM