Review:Thomas Wildus and the Book of Sorrows by J. M. Bergen 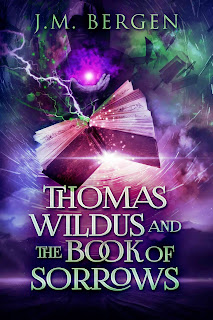 Ever wonder what it might be like to live in a world of hidden magic? A world of secrets and dangers you only have glimpses of while you wonder, could it possibly be true?

This is the dilemma of Thomas Wildus, a twelve-year-old boy whose father’s last words to him are “Magic is real, Thomas. No matter what happens, always remember that magic is real.”

This coming of age story begins with a modern boy’s quest to find out, once and for all, if magic truly exists. Problem is, everyone just laughs him to scorn. Until one day, in a mysterious bookstore, someone doesn’t. Instead, the proprietor entrusts Thomas with an ancient book, saddled with a pack of promises.

The more Thomas reads, the more the book changes. Strange things start happening and peculiar people pop up in his life. Soon Thomas finds himself in the middle of an epic battle, with a destiny he didn’t ask for, but is desperate to fulfill.

Throughout this story, we see Thomas’s interactions with his closest friends, a racially and socially diverse cast of characters who add richness to the story. The author’s tone captures the attitude of upper middle graders – a compelling mixture of playfulness amid life-or-death stakes, whether in a doodle war between friends, a volleyball match, or when facing down a mortal enemy.

The importance of practice and training in personal and magical development is highlighted, along with the motto: Progress, not perfection, which is a key concept for readers of any age. The author also explores philosophical questions like, What happens if I gain power, but lose control? Bergen guides readers in discovering their own views of power and what matters most in life.

Thomas Wildus and the Book of Sorrows is an enchanting foray into a fantasy world where stories can become realities, science and magic intersect, and crystals hold the power to destroy. If you're looking for an enthralling and thought-provoking read, this is the book for you!

Watch for its release in February 2019! 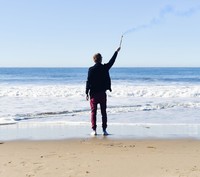 J.M. Bergen graduated from the University of Arizona with a degree in creative writing and a minor in business. Over the years his writing has appeared in a variety of publications under a variety of pen names.

J.M.’s debut series originally started as a bedtime story for his oldest son. The story turned into a saga, and one book turned into five. The first book in the series, Thomas Wildus and The Book of Sorrows, is scheduled for release in February 2019. The second, Thomas Wildus and The Wizard of Sumeria, will be published in late 2019, with the remainder of the series released before the end of 2021.

When J.M. isn’t working on the Thomas Wildusbooks, you can find him playing with his kids, splashing in the ocean, or dreaming up new adventures. If you ever meet him and can’t think of anything to talk about, you might ask about Herman the Shark, the Kai and Eli stories, or why Riddle-Masterby Patricia McKillip is his all-time favorite book. Or maybe, just maybe, you’ll have questions and stories of your own (if you do, he’ll think that’s far more interesting). To learn more and connect online, visit www.jmbergen.com.
Posted by R. H. Roberts at 10:00 AM