Where The Watermelons Grow 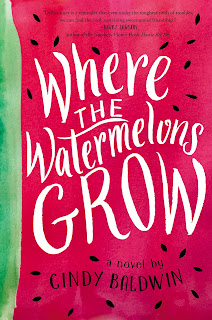 Middle Grade Minded is excited to have debut author Cindy Baldwin with us today. Her middle grade novel Where The Watermelons Grow is a tug-at-your-heartstrings story about Della, a twelve-year-old girl determined to heal her mama from a sickness that causes her to hear voices and talk to people who aren’t there. A literary novel with attention to imagery, voice, and character development, this debut has already been named a Summer/Fall Indies Introduce selection and has received  starred reviews from School Library Journal and ALA Booklist. This fabulous middle grade hits shelves on 7/3/18.

And now for our interview with Cindy: 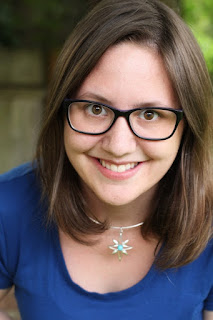 MG Minded: In Where The Watermelons Grow, the main character’s mother struggles with schizophrenia. I loved how you portrayed this struggle as an illness that can be treated through the support of doctors, family, and community. My favorite line in the book is, “No sickness in the world could make my mama’s love for us less real.” What inspired you to write about mental illness? In your opinion, why is it important for middle grade literature to deal with tough topics?

Cindy Baldwin:
The initial inspiration came to me several years ago when I was singing “Down by the Bay” to my then-one-year-old daughter. The idea of a girl running away from home because she couldn't deal with her mama's sickness came into my mind and stayed there! Because of that inspiration, writing about mental illness—specifically schizophrenia, which affects a person's perception of reality—felt natural.

However, as soon as the idea landed in my brain, I knew that I wanted to write a book about disability that didn't end with the disability being “cured.” Although I don't have schizophrenia, I am also a disabled parent, and in many ways my daughter and I have struggles that are similar to those of Della and her Mama. She's much younger than Della, but has already had a host of her own ideas to attempt to make our family more “normal”! That line in particular, about no sickness making her mama's love less real, is one that I wrote with tears in my eyes, thinking of my daughter. If there's nothing else that she remembers from her childhood, I hope it's that idea.

I think that addressing difficult topics in middle grade is almost more important even than addressing difficult topics in any other age group! Those upper elementary and middle school years are profoundly important in a kid’s life, as they walk the line between childhood and adulthood; in many ways, kids that age internalize and feel responsible for hard things in a way that high school kids don't to quite the same degree because they have a better grasp of the world around them as separate from them. Kids in the middle grades experience really difficult things! When I was eleven, I was hospitalized for the first time that I could remember, and had to stay alone each night as a highly anxious preteen because my parents were busy with my mom's pregnancy with triplets (yep, you read that right!). When I was thirteen, I learned that my disease, cystic fibrosis, is life-shortening, and that I might not live to turn forty. I know so many people who were experiencing some of their most life-defining hardships during that period of time, and I firmly believe that kids need books that can speak to those difficult experiences.

MG Minded: The gardening scenes took me right back to the family farm where I spent many childhood summers. Can you tell readers a bit about your upbringing and what inspired you to write a novel set on a farm in the South?

Cindy Baldwin:
My family has moved a fair bit, but from age seven until I got married, I lived in Durham, North Carolina, about two or three hours from Della's fictional hometown of Marysville (which, if it existed, would be in Bertie County, NC). I spent much of my adult life trying to move back to the South, and while I never managed it, NC will always be my heart's home! I love setting my books there, because it's a way to stay connected to the place I love best.

I modeled a lot of Della's town both on the rural coastal plains region of North Carolina, and on my great-grandparents’ homestead in Hartsville, South Carolina. My great-grandpa was a sharecropper who eventually made enough to buy his own land and then farmed it—sometimes with just his family members, sometimes hiring extra help, much like Della's family—until he retired. I grew up spending part of every family reunion at “The Farm,” and details like the sunflowers lining their long driveway, the taste of fresh butter beans, and boxes and boxes of sweet peaches bought from roadside stands will always be cherished memories! (That farm is also where I became intimately acquainted with the misery of trying to sleep during a Carolina summer night in a house with no AC!!!)

MG Minded: Where The Watermelons Grow is your debut novel. How long have you been writing and working on craft? Any advice to writers pursuing the often bumpy road to publication?

Cindy Baldwin:
I've been writing stories for as long as I can remember, and got serious about learning how to write novels when I was a teenager. After college, I started querying one of my books. Where the Watermelons Grow is actually the THIRD book I tried to get an agent with, and the fifth novel I wrote. It was a bumpy road indeed, and there were a lot of rejections! There are a couple of things I firmly believe when it comes to achieving writing success:

1. You are never too good to learn more or become better. I spent a lot of years spinning my wheels because I felt like I'd gotten as good as I could and still wasn't achieving success. I had some humbling experiences that showed me just how far I still had to go, and encouraged me that I COULD keep learning and COULD get better if I was willing to check my ego at the door and put in the work. Sure enough, once I did that, I improved, and eventually that work paid off.

2. Success takes tenacity. I do know some writers who sold their first novel, or got an agent quickly… But they're the exception, not the rule! For most of us, that “ten years to overnight success” principle holds pretty true.

3. Besides tenacity, I think the other ingredient required for a writing career—both before AND after you get published—is flexibility. I'd never written middle grade before Watermelons, but when my previous attempts to get published with young adult manuscripts weren't working, I changed my approach and decided to try something new. Often I think it's easy to get stuck in what we WANT to be working, when sometimes being willing to try a new way of looking at things is what it takes. Tenacity plus flexibility is my secret formula!

Cindy Baldwin is a fiction writer, essayist, and poet. She grew up in North Carolina and still misses the sweet watermelons and warm accents on a daily basis. As a middle schooler, she kept a book under her bathroom sink to read over and over while fixing her hair or brushing her teeth, and she dreams of writing the kind of books readers can’t bear to be without. She lives in Portland, Oregon with her husband and daughter, surrounded by tall trees and wild blackberries. Her debut novel, Where The Watermelons Grow, is an Indies Introduce title for summer/fall 2018.
Posted by Unknown at 5:00 AM

I'm so happy for your success, Cindy! And hooray for all the learning/tenacity/flexibility that led to WATERMELONS!