After Erin Entrada Kelly's Hello, Universe won the 2018 Newbery Medal for outstanding contribution to children's literature, I immediately requested the book from my local library. (My dog Cooper could tell this one was going to be good!) 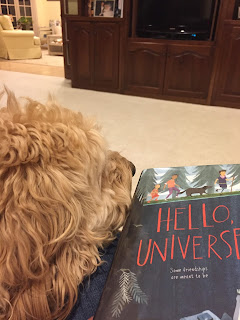 Told through alternating points of view, Hello Universe is the story of four kids: Virgil, a shy, misunderstood boy; Valencia, who is as stubborn as she is clever; Kaori, who tells fortunes and reads the stars; and Chet, the neighborhood bully. The four kids aren’t friends. They don’t go to the same school. But when Chet pulls an unthinkable prank on Virgil and Virgil’s pet guinea pig, the lives of these middle schoolers collide in unexpected ways.

The Newbery judges called Hello Universe a “modern quest” that “shimmers with humor and authentic emotion.”

I call it masterful storytelling.

1. Alternating points of view
Not only is each chapter told from differing viewpoints, but they are written in different tenses. Valencia’s chapters are in the present tense. (“I walk up to the well. Sure enough, the mouth is wide open. Someone’s been goofing off. And here’s evidence: a small pile of rocks, neatly placed.”) Yet Virgil’s story is written in the past. (“He flinched, the same way he did when teachers called on him even though he hadn’t raised his hand. Virgil covered his ears. He pressed his palms against them until it hurt.”) As a writer, this is extremely difficult to pull off. Yet Erin Entrada Kelly did so seamlessly, weaving the story together without pause.

2. Amazing plotting
When I started reading, I didn’t see how the four kids’ stories would weave together. But, sure enough, the lives of these children collided in a surprising way. As a writer, I know this was carefully planned and plotted, perhaps over the course of many years.

"The darkness had teeth that snapped and clenched, and here was Virgil, sitting at the bottom of its throat.”

“The voice breezed through the well like steam drifting from a cup of hot chocolate.”

“Ruby sighed. The sound traveled like a curl of invisible smoke.”

"He couldn’t breathe, either. His lungs had been stolen by the darkness.”

Spoiler alert: One of the kids gets stuck in the bottom of a well. There’s no light or food, and only a limited amount of air. Talk about a page-turner! 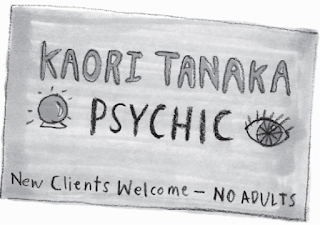 Kaori is a self-proclaimed psychic. The texts between Valencia and Kaori made me laugh out loud:

Kaori: I know everything about dreams. I’ve studied Freud. Would you like an appointment?

Valencia: How old are u? how do I know ur not crazy killer?

Kaori: That’s because I’m the reincarnated spirit of a 65-year-old freedom fighter.


Hello Universe most definitely deserves the highest of accolades. Middle grade readers are in for a treat! 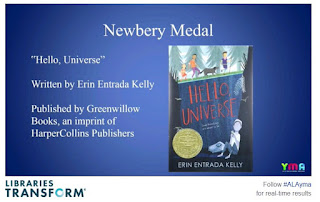 It's winging its way to me now. Looking forward to reading it! :)