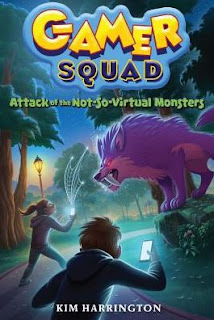 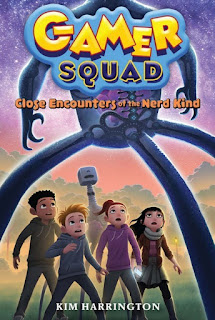 ATTACK OF THE NOT-SO-VIRTUAL MONSTERS :

What happens when your cool virtual reality game....becomes REAL?!

Monsters Unleashed - where you catch virtual-reality monsters on your cellphone - is one of the hottest mobile games around, and Bex and Charlie just can't stop playing. They even check out an old map in Charlie's grandfather's attic in hopes of discovering some forgotten places in town where the rarest monsters might hide. But they find a strange machine up there too, and after Charlie switches it on, the WiFi goes down...and Bex's entire catalog of monsters vanishes! And that's not the worst of it: all of the creatures she's collected on her phone escape into the real world. Can the friends nab the beasts before they become monster lunch!?

CLOSE ENCOUNTERS OF THE NERD KIND :

First they took on monsters. Now they have to face ALIENS.

Come join Bex and Charlie on their second thrilling adventure in the GAMER SQUAD series!

After their scary adventure, Bex and Charlie have sworn never to play Monsters Unleashed again. Then Veratrum Games Corp releases a new augmented reality game featuring aliens instead of monsters, and the best friends can't resist. After all, everyone loves it, even their science teacher, because it includes real star charts. But when they go to an observatory on a class trip, and open the game near a radio telescope, they get more than they bargained for: REAL aliens! One is sweet and kind; the other...not so much! Can Bex and Charlie capture the bad ET before it destroys their town?!

It's not often that I'm asked to review books, but sometimes a a book fits me like a missing puzzle piece that you've basically searched the entire house for about three weeks until it drives you absolutely mad because you've been working on the puzzle for like a MONTH. Okay, that doesn't make sense..how bout the book just calls out to me because I'm the perfect match.

If you know me, you know that I am practically obsessed with video games, so I would be HIGHLY critical of a book that is tapping into my passion. I'm like the judge of judges when it comes to over-analyzing video game books (especially when you think about the fact that the book that got me an agent was a video game based book lol)

As soon as I received my copies of ATTACK OF THE NOT-SO-VIRTUAL MONSTERS and CLOSE ENCOUNTERS OF THE NERD KIND I was immediately attracted to the cover art. Sure, you can say don't judge a book by it's cover, but if I'm a kid in a book store, I'm doing just that. If I were a kid, I would have had massive grabby hands just off the artwork alone, but enough about covers we're talking about the book itself.

Let's dive into Attack of the Not-So-Virtual Monsters first. We're introduced to our main characters of the series, Bex and Charlie, who are quite possibly some of the most entertaining middle-grade characters I've encountered in quite a long time. Their sense of humor is brilliant (who doesn't love bad dad jokes about science), and their friendship is unbreakable. Both of these characters, including all the side characters we encounter in the story from Marcus to Willa and even the crazy old cook who lives in town all come to life on the page with different personalities and an amazing middle grade voice.

Talking about voice, it's not even the characters and their dialogue that are convincing, but the descriptions throughout the novel. When you're talking about pokemon-esque monsters, you've got to have a crazy imagination and describing them is key. But I felt as if I were staring them down myself when they would encounter a new one. From vampire wolves, to half cat / half pig monsters...and spiders. COME ON..SPIDERS? REALLY? WHY?! (I hate spiders). Trust me, if you're a fan of pokemon, and who isn't, you'll fall in love immediately with the Monster capture game that is the focus point of the book.

It's non stop action from beginning to end, and you'll be hard pressed not to read this book in one sitting. Especially with the twists in the action, and character development up until the very end, it's a page turner.

And yes, this made me want to play pokemon go again lol. Overall, this book is a PERFECT introduction to our main cast (The Gamer Squad), and a stellar start to the series where gaming is brought to life.

As soon as I finished the first book, I basically jumped right into CLOSE ENCOUNTERS OF THE NERD KIND - props right off the bat for the reference to one of my favorite sci-fi flicks.

Now this book is basically a direct continuation from book 1 with more of the same great fast paced action and hilarious humor. While it's similar in a way since we are dealing with another "monster" invasion, this time our kids are tasked with a bit more than just capturing the monsters, and it turns into more of a battle of wits. The characters are growing and changing, the conflicts are growing and changing, and even the twists are changing. It's great how Kim was able to create a similar story with a completely different feel allowing for another super fast read.

No joke - I managed to tackle both of these books so incredibly fast that it left me thirsty for more. I was actually upset that I only got to review the first two, and was able to get my hands on the third part to the Gamer Squad series, APP OF THE LIVING DEAD, coming out October 3rd. Zombies? Sign me up....

Makes me wish there is going to be part 4 to the series, and this time with Dinos a la Jurassic Park. MAKE IT HAPPEN!!

Anyway, if you're a kid, ages 8-12 with any sort of passion toward gaming...heck just action paced good times in general - do yourself a favor and pick up these two books and immerse yourself in an awesome world where friends are key to surviving the most bizarre adventures you'll ever have.

I give both Attack of the Not-So-Virtual Monsters and Close Encounters of the Nerd Kind a whopping 4.5 out of 5 video game controllers.