Cover Reveal: Molly in the Middle, by Ronni Arno

Middle Grade Minded is excited to reveal the cover of Molly in the Middle, a hilarious middle grade novel by Aladdin M!X author Ronni Arno.

But her new, outlandish ways put her in a different middle altogether. She now finds herself in the middle of her new, popular group of friends, who think the New Molly is amazing and bold, while her old BFF, Kellan thinks the New Molly is mean and aloof and headed for trouble. What’s worse, Kellan doesn’t hide his feelings. Faced with a probable future in a wheelchair, Kellan doesn’t understand why Molly would risk getting in trouble just to be popular. So when Molly has to choose between going to the year’s biggest party with her new pals, or participating in the Muscular Dystrophy Walk with Kellan, she’s stuck in the middle once again. Can Molly reconcile the Old Molly with New Molly—and figure out the best way to make her mark?

The cover alone makes you want to pick up a copy.The amazing cover art is by Ashleigh Beevers. http://www.ashleighbeeversart.com 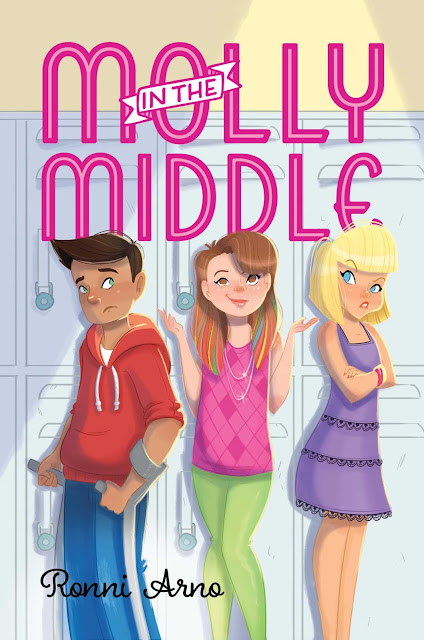 Such a cute cover! I can imagine kids totally drawn to it!