Today we have an AWESOME cover reveal for Kim Harrington's GAMER SQUAD #1: ATTACK OF THE NOT-SO-VIRTUAL MONSTERS!

What happens when your cool virtual-reality game . . . becomes REAL?
Pokémon GO meets The Goonies in this action-packed middle-grade series.

Monsters Unleashed—where you catch virtual-reality monsters on your cellphone—is one of the hottest mobile games around, and Bex and Charlie just can’t stop playing. They even check out an old map in Charlie’s grandfather’s attic in hopes of discovering some forgotten places in town where the rarest monsters might hide. But they find a strange machine up there too, and after Charlie switches it on, the WiFi goes down . . . and Bex’s entire catalog of monsters vanishes! And that’s not the worst of it: all the creatures she’s collected on her phone escape into the real world. Can the friends nab the beasts before they become monster lunch?

Check out this first book in a planned three-book series from Sterling Children's Books. It releases on August 1, 2017 but is available for pre-order now. Grades 3-7.

And now for the moment you've all be waiting for... 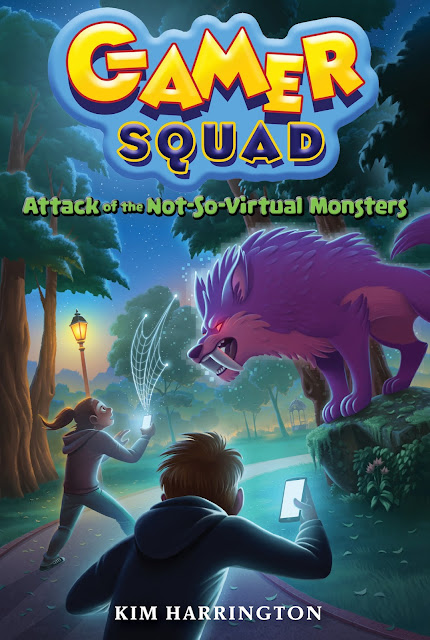 That's one SUPER cool cover! So make sure to check out this awesome sounding book on August 1, 2017 and pre-order it now!

Kim Harrington is the author of Clarity, Perception, The Dead and Buried, and Forget Me for teens and the Sleuth or Dare and Gamer Squad series for kids. She lives in Massachusetts with her husband and son. When not writing, she's most likely reading, watching one of her favorite TV shows, or fantasizing about her next vacation. Join her on Twitter (https://twitter.com/Kim_Harrington) or Instagram (https://www.instagram.com/kimharringtonauthor/).

Posted by Jamie Krakover at 4:56 AM

Thanks so much for revealing the cover! I'm so happy with it, and so excited for the book to be in the world soon. :)

Wow. This is a cool cover. I love the "not so virtual monster" idea, too!