Jorie and the Magic Stones Excerpt and Giveaway

Today we have an excerpt and giveaway for the chapter book Jorie and the Magic Stones. To enter the giveaway for a paperback copy just leave a comment on this post before 11pm CST Monday December 12, 2017. Check out the synopsis and excerpt below.

Synopsis:
When Marjorie went to live with her frosty maiden aunt, she couldn’t imagine the adventures she would have with dragons — good and bad — and all the strange creatures that live in a mysterious land beneath the Tarn. The spunky 9-year-old redhead forges an unlikely friendship with an insecure young boy named Rufus who lives with his crusty grandfather next door. When Jorie — for that is what she prefers to be called — finds a dusty ancient book about dragons, she learns four strange words that will send the two of them into a mysterious land beneath the Tarn, riddled with enchantment and danger. Hungry for adventure, the children take the plunge, quite literally, and find themselves in the magic land of Cabrynthius.

Upon meeting the good dragon, the Great Grootmonya, Jorie and Rufus are given a quest to find the three Stones of Maalog — stones of enormous power — and return them to their rightful place in Cabrynthius. Their mission is neither easy nor safe, and is peppered with perils in the form of the evil black half-dragon who rules the shadowy side of the land. They have to deal with a wicked and greedy professor, the tragic daughter of the bad dragon, caves of fire, rocky mountainous climbs, and a deadly poisonous butterfly.

Jorie must rely on her wits and courage to win the day? Can she do this? Can she find all three Stones? Can she save Rufus when disaster befalls him? Can she emerge victorious? She and Rufus have some hair-raising challenges, in which they learn valuable lessons about loyalty, bravery, and friendship. 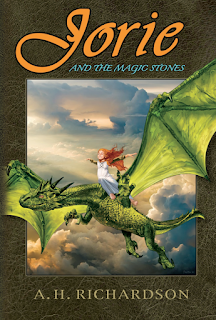 Excerpt from Jorie and the Magic Stones

Once in the quiet of her room, Jorie closed the door and retrieved the book carefully hidden under the floorboard. She didn’t know why she felt it so important to hide the book, but her instincts told her that this was a very special book that needed to be carefully guarded. Before settling down to study it, she went to open the window in order to hear the sound of the horses when her aunt returned from her errands. In that way, she would have time to put the book back in its hiding place.

Perhaps because of the rain and damp, the window was stuck and refused to open. Although Jorie pushed, it appeared that it was well and truly stuck shut. Jorie returned to her book and opened the pages oh-so-gently. She didn’t understand the words in front of her, even though she was an excellent reader. They were faded and seemed to be written in another language. Jorie spoke quite good French, but this was certainly not French. She thought it might have been Celtic, because there were c’s, and w’s and y’s, and they all seemed to run together.

She found one phrase that caught her attention, and carefully pronounced it under her breath. “Cwythr ogan mosdrath kiranog. I wonder if that is how it is pronounced.” Then in her most dramatic voice she called out, “Cwythr ogan mosdrath kiranog,” and felt a shiver run through her. No sooner had she said this than the window flew open. Jorie’s hand flew to her mouth. She inhaled, staring hard at the window. “That window was stuck and wouldn’t budge an inch, even under my tugging.”

As she regained her composure, Jorie decided she needed to memorize these words. She had always been good at history and could easily remember dates of battles, when kings were crowned, and where, and all the things they make you remember at school. She turned the four words over in her mind, a bit afraid to say them aloud again. What if something else happened? Could it be a spell? Could it be a curse? Was it someone’s name? Although it would be a really long name. Of course, it could just as easily be a recipe for a jar of marmalade! Jorie giggled. They probably didn’t have marmalade back in those days, and why would they put it under a picture of a flying dragon? No — that didn’t make sense.

Jorie studied her new wonderful find for most of the afternoon. After that, she lay back on her bed, her hands clasped under her head, and turned things over in her mind. She thought about the window; now that had been very, very strange! She was sure that Aunt Letty had no idea that the book existed, for had she known, she might have given it to a museum or a library for old stuff. If she had known about it, she wouldn’t have put it under old floorboards, covered with dust and cobwebs.

Jorie didn’t care much for spiders, but she had plucked up her courage and plunged her hands into that space, perhaps sensing that there was a treasure there.

She wondered what her new friend Rufus might think of it. Should she tell him? Could she trust him? Might he not tell grownups, who she believed would take it away immediately, never to be returned? She couldn’t take that chance.

She needed to give her new friend a chance; perhaps Rufus would keep it their secret, and maybe the two of them could put their heads together and find out a little more about this book. Jorie felt that this discovery of hers had more to do with the history of Dunham and its mysterious past than it had as a mere fairy story.


Jorie and the Magic Stones is the first book in a new chapter book series by A. H. Richardson. Children everywhere will love this adventurous fantasy of Jorie and Rufus, two orphans from very different walks of life, who meet by chance, find a mystic book with four magical Druidic words that provide the key to an astonishing adventure that will plunge them, quite (literally) into another world beneath the dark waters of the Tarn.

“Jorie and the Magic Stones is an enchanting tale of adventure and childhood friendship that captures the attention and imagination of children and adults alike.” - 5 Stars, Amazon Review

“If ever there was a children's book that was meant for children of all ages, this would be that book. From page 1, you instantly fall in love with the Jorie, the heroine. The storyline flows wonderfully. It makes you feel as if you're there with the characters feeling the excitement, fears, and joy that they feel as they go on an incredible adventure.” - 5 Stars, Matthew and Alicia Lucy

“I absolutely love this story! It just carried me away and I couldn't put the book down!! I loved all the different characters... The author did a wonderful job describing all of them and my imagination kept on going!” – 5 Stars, Amazon Review 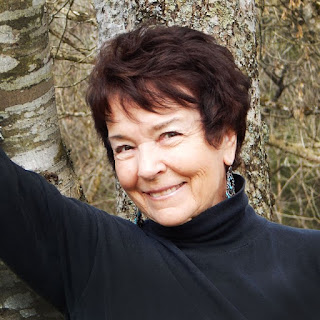 A. H. Richardson was born in London England and is the daughter of famous pianist and composer Clive Richardson. She studied drama and acting at the London Academy of Music and Dramatic Art. She was an actress, a musician, a painter and sculptor, and now an Author.

She published her first book, Jorie and the Magic Stones, in December 2014, and has written a sequel to it titled Jorie and the Gold Key at the request of those who loved the first ‘Jorie’ story. She is currently working on the third book in the series.

She is also the author of Murder in Little Shendon, a thriller murder mystery which takes place in a quaint little village in England after World War Two, and introduces two sleuths, Sir Victor Hazlitt and his sidekick,  Beresford Brandon, a noted Shakespearian actor. She has more ‘who-dun-its’ planned for this clever and interesting duo… watch for them!

A. H. Richardson lives happily in East Tennessee, her adopted state, and has three sons, three grandchildren, and two pugs. She speaks four languages and loves to do voiceovers. She plans on writing many more books and hopes to delight her readers further with her British twist, which all her books have.

To learn more, go to https://ahrichardson.com/

Posted by Jamie Krakover at 5:30 AM

This books sounds good! Thanks for posting. I retweeted your post, too.

Happy to highlight fun children's books. Thanks for sharing the post! Good luck in the giveaway!

I really liked the synopsis and excerpt from Jorie and magic stones. The story seems to be interesting with magical twists in it and would love to read it soon.

yeah it sounds like a really fun and exciting story :)

Congrats Sue, you won the copy of Jorie and the Magic Stones. Please email your mailing address to mgminded@gmail.com