Cover Reveal and Giveaway: The Eye of Midnight by Andrew Brumbach

We at Middle Grade Minded are geeking out right now. We're fangirling. We're fanboying. We're positively verklempt because today we've got a glorious cover to show you.

On a dreary day in May of 1929, William and Maxine arrive on the doorstep of Battersea Manor to spend the summer with a grandfather they have never met, resigning themselves to a three-month exile of bird-watching and backgammon. But the cousins soon discover that Colonel Horatius Battersea is not the sort of grandpa who spends his afternoons napping on the porch swing, and that his past career as a British soldier, world explorer, and special agent has earned the old man a pith helmetful of formidable enemies and family secrets.

Their summer becomes decidedly less sedate the moment a cryptic telegram is delivered to the manor, and Grandpa promptly whisks the cousins off to New York City to meet an unknown courier and collect an ominous package. On their way to the midnight rendezvous, though, Grandpa vanishes without a trace. Lost and alone in the city’s underground, the cousins stumble upon Nura, a young Turkish girl who promises to help them track down the parcel and rescue Colonel Battersea. But with a ring of cold-blooded gangsters and a secret society of assassins all clamoring for the same elusive object, the trio soon finds themselves in a desperate struggle just to escape the city’s dark streets alive.

Wow, right?! And if you thought the description sounded incredible, wait until you see the cover! Are you all ready? Yeah, me, too.

Scroll down and prepare to have your minds blown from pure cover awesomeness! 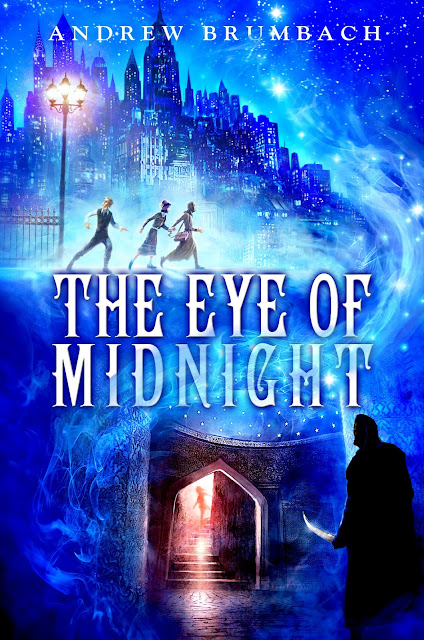 Beautiful! We love the color and how packed full of detail it is. I feel like this cover is telling us more than we realize. It's one of those pieces of art that you can go back later, after you've read the book, and find things that were right in front of you that you just didn't notice before. So, yeah. In a word...amazing. And as a special treat, we've got an interview with the author and a Rafflecopter giveaway where one lucky winner will receive a signed copy of The Eye of Midnight!

Interview with the author

Q 1: Andrew, thanks for talking with us today. We love your cover! There are so many incredible details that jump out at you. When you first saw the cover, what did you fall in love with first?

Thanks for saying that. There’s a lot to love about the cover, right? It grabs you and dares you to find out where you’ll be taken if you open its pages. I’ve always been a sucker for classic adventure stories because of their ability to transport. It’s a genre that inhabits the everyday ordinary world but allows the fantastic to seep in. I think this cover captures all of that. There’s so much narrative there in the imagery—the kids slinking around under the shadows of the New York skyline, the swirling mist and the starry sky, and the lurking menace beneath. It pulls you into the atmosphere of the story, makes you ask questions. I have high hopes that kids will pick up the book and want to read it just because of the cover alone!

Q 2: I think they will! How much input did you have while the cover was being designed?

I was a studio art major as a college undergraduate, so I figured that entitled me to all sorts of opinions about what the cover should look like. My cover designer and my wonderful editor, Rebecca Weston, humored me throughout the process, listening to all my inspired suggestions and even taking a couple of them to heart. In the end, the cover surpassed anything I could have hoped for, but it was really all thanks to the staggering talents of my designer and my cover artist.

Q 3: Well it certainly surpassed anything we could've hoped for, too! So who are the masterminds behind this stunning piece of artwork?

Right—so the masterminds you’re talking about are Kate Gartner, one of the art directors at Random House Children’s Books, and California artist Jeff Nentrup. Kate is some kind of uber-maestro-designer-extraordinaire, and she makes all the books she gets her hands on look absolutely stellar. I had the chance to meet her the last time I was in NYC, and I can say she is as lovely and fun as she is talented. And Jeff is this amazing digital/traditional artist who seems able to move effortlessly between all kinds of different styles. He’s really passionate about bringing visual context to an author’s vision, and cover illustration is just one of his many gifts, so if you get a chance, you need to drop by his website at www.jeffnentrup.com and check out his work. It will make your day.

Q 4: The book is set in 1920s New York which is such a cool idea for a MG book. What inspired you to write about that time and place?

The twenties were great, weren’t they? With all the roaring and whatnot? I love the texture—gangsters and flappers and speakeasies and climbing skyscrapers and depraved dances like the Charleston and the Flea Hop and people saying things like “Applesauce” and “Posilutely” and “Go chase yourself.” I love that back in the twenties Adventuring was still a legitimate career choice, thanks to the exploits of people like Percy Fawcett and Lawrence of Arabia and Freya Stark. I love that this setting gave me a chance to come up with a plotline that didn’t have to account for cell phones. And the epicenter of the era, for me, has always been New York City. I feel a certain amount of wistfulness for that particular time and place. I’m not sure if young readers almost a century removed bring the same sense of nostalgia for all of it, but wouldn’t it be great if I could impart some of that to them?

Q 5: I love that sentiment—adventuring was still a legitimate career choice. Brilliant! And speaking of brilliant (10 points for an amazing segue), what are you working on now?

Up next I think there’s more trouble for my main characters, Maxine and William. I have all kinds of peril planned for them if they manage to survive this current adventure. Which I’m not saying they do. But they may. I guess you’ll just have to read the book to find out.

Andrew Brumbach grew up square in the hippie community of Eugene, Oregon, surrounded by artists and musicians and storytellers. He studied art in Texas, traded options in Chicago, and spent a few years lost in the neon neighborhoods of Tokyo. Somewhere along the way, he married the girl of his dreams and had four practically perfect kids, but he never overcame his weakness for the power and transport of story. Now he lives in suburban Illinois but secretly daydreams of chasing bandits across the desert with Lawrence of Arabia and Gertrude Bell under cloudless, starry skies.
You can find Andrew on:
Upstart Crow Literary     Twitter     Goodreads     Website

Thanks, Andrew, for giving us the opportunity to show this cover to the world! Everyone, while you wait for this book to finally hit the shelves, you can go ahead and add it to your Goodreads TBR shelf right now. And then earn some chances at winning a signed ARC of The Eye of Midnight in our Rafflecopter giveaway!

This cover is so stunning! I just can't get over the colors! *grabby hands*

I agree this cover is beautiful! I love the coloring! Can't wait to pick this one up :D

Thanks so much you guys! New website to go along with it, too!

The books sounds like a great read! Love the cover!