Cover Reveal! SOME KIND OF COURAGE by Dan Gemeinhart (that's me)

I'm so excited for this blog post.
We all know how important covers are. They are a reader's - or, a possible reader's, rather - first introduction to a book. Despite precautionary cliches to the contrary, most readers decide as soon as they look at a book's cover whether or not it's something they want to read. As an elementary teacher-librarian, I can assure you that middle grade readers are even more guilty of this than most. If a book's cover doesn't resonate with a kid, doesn't hook them or intrigue them or speak to them, it's almost a dead certainty that they will not check it out, regardless of how persuasively I try to sell them on the story. In some ways it's like shopping for a house; kids are looking for a story to move into for awhile, and they're pretty unwilling to look past a crumbling front porch, a broken window, or garish pink paint. Curb appeal matters.

Beyond selling a book, though, covers also really become a part of a book's identity. Permanently, more or less. I bet if you closed your eyes and thought of a few of your very favorite, most beloved books, you could probably picture their covers pretty darn clearly. Those covers are tied and tangled up with the stories now; the story is a book's heart, but the cover is it's face. 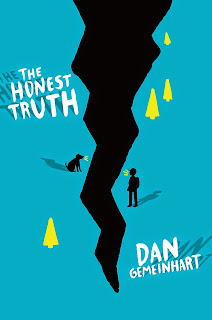 So, as a writer, covers feel pretty high stakes. It's the face of your baby. It's the visual identity of something you spent years of your life and gallons of your passion on. Seeing your book's cover - with oh my goodness YOUR NAME on it - is a beautiful, breathless moment. You can only hope it's a good one. A cover that readers will love. A cover that you will fall in love with.

I've been so lucky. My debut novel, THE HONEST TRUTH, came out from Scholastic Press this past January. The cover was designed by Nina Goffi, and from day one I absolutely loved it. I felt - and still feel - that she really "got" the book and managed to put it's very essence right there in the simple, stark images of the cover. A year in, and I'm still madly in love with it.

So I was thrilled when I heard that Scholastic was having Nina Goffi do the cover for my second book, SOME KIND OF COURAGE, which will come out January 26th, 2016. It's historical fiction, set in Washington state in the year 1890. It's about Joseph, a boy orphaned on the journey west. All that he has left of his life and his family and his past - of himself, really - is his horse, Sarah. When she gets sold away to a traveling horse trader, Joseph vows to follow her through all the perils of the wild frontier as far and as long as it takes to get her back.

It is not a sequel to THE HONEST TRUTH, but like that book it's an adventure story with heart and emotion. It's about family, and friendship, and home, and loss, and belonging. It's about doing whatever it takes to be with the one you love. I love this story...I love its characters, I love its setting, I love its beating heart and its racing pulse. So I really wanted to love its cover.
And I do. Boy, do I.
Here it is: 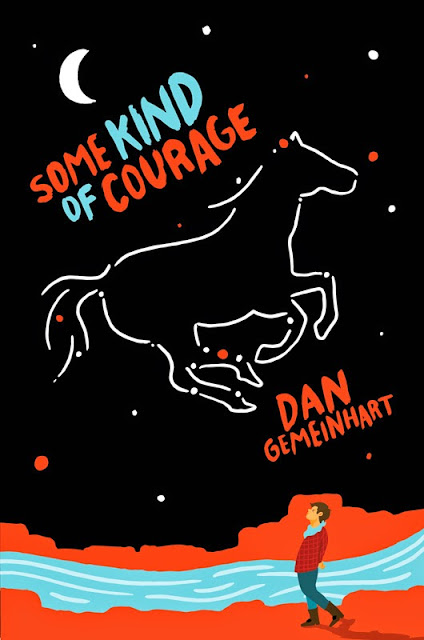 Oh, man. I love how it has enough in common with THE HONEST TRUTH - the font, the style, the simple color scheme - to clearly be connected to it, but is also different and distinct enough to clearly be its own book, its own story. I love the colors. I love the boy, alone but with his eyes on the horse that he loves. I love the presence of the setting, made clear without getting in the way or taking over. I love how she included the stars and the river - both thematic elements of the story that will mean more to a reader once they've finished reading and close the book to look back at this beautiful cover.

I could not be happier with this cover. I feel so lucky to be with Scholastic, and so lucky that both of my books have been so beautifully handled by Nina Goffi. I can't wait for it to be out there in the world.

I'm an admirer of book cover art, and I find your covers ingenious. Like visual poetry, a cover has to convey a lot with little.

I have to admit I go too much by the cover, also. If the artist comes up with a cover that's representative of the book, however, it's not necessarily a bad thing.

Congratulations, Dan! It's such a wonderful feeling when you love your cover :)

That is a fantastic cover, Dan. The colours, the way the boy looks up at the horse. Love it!

I agree, both covers are very dynamic and inviting. Congratulations!