MG Review : And In Their Passing, A Darkness : The Salt Machine 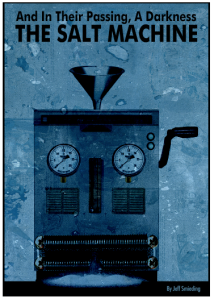 When I was asked to read Jeff Smieding's (a fellow Red Sofa author) new MG serial, it was impossible for me to say no. I don't know about some of you, but I have been looking for a new MG story to reel me in for quite some time now. The only problem was that I have been looking for something different. Something that I haven't seen done over and over again. And it seems as if I just hit gold with this bad boy.

Let me warn you straight off the bat, this isn't a book, it's a serial and it's being released in monthly installments. Now, I don't know about you, but leaving me hanging at the end of each serial just leaves me crying for more. I'm not talking metaphorical tears here, folks. I'm talking legitimate, head on my desk, pounding on the table "GIVE ME MORE." type tears. Crap. Tears. I feel like someone is watching me, waiting to milk me for my tears. 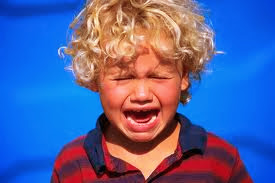 "Why not turn little Billy's tears into gold?". Get a Salt Machine.

First of all - that's just wrong. A machine that uses the tears of children and turns them into the finest grains of salt? That's some sick stuff right there. Downright disturbing if you ask me. Especially when it's your own mother looking down at you waiting for you to cry just to feed her drinking and smoking habits. If she were real, I'd give her a quick whack upside the head and ask her what the hell she was thinking.

Sounds cruel so far? It sure does, but that's exactly what I've been looking for. A darker tale and to watch children face the worst in people.

The story follows fatherless siblings, George and Vera, facing off against a wicked mother and strange forces in the forest surrounding their home. But this isn't any ordinary forest. It hides a secret and it's only when Vera disappears into the forest with a strange "boy" that George realizes its up to him to find out what really lies in its depths. I really don't want to spoil anything for you, but I can already tell you that this story is going to be taking some sharp twists and turns.

There's one particular scene where George encounters his neighbor, Mr. Brody, who tells a disturbing tale about the "powers" within the forest. I was practically on the edge of my seat on the train when I was reading this, wanting to know where the story was heading until it culminated in a shocking finale.

Both the writing style and the story remind me a lot of Neil Gaiman's children s books. It's dark. It's gloomy. And frankly it scares me sometimes. This is of course, all in a good way as the setting up of the atmosphere is done brilliantly. As for the characters, you immediately feel and care for George and Vera. Their struggles are apparent, and their feelings come out not only in the way the converse, but by the excellent way Jeff emotes them with their actions.

My only problem now, is that I have to wait for the next installment, which luckily comes out next month. Until then, I'll have to keep myself busy but it won't be long.

Oh, and one more thing. There's more to the salt, than meets the eye.

So do yourself a favor, click on the link and snag yourself a copy of AND IN THEIR PASSING, A DARKNESS : THE SALT MACHINE. You will not be disappointed.
Posted by Unknown at 4:43 AM