Starting in fifth grade, and all the way through of middle school, I went through more groups of friends than used tissues. It may have been because I was insanely shy, a giant nerd, a goody-two-shoes, or even just because I was an easy target. I cried... a lot.

But let's face it, girls at that age can be mean. They are hormonal balls of insanity, and they often don't know how to channel emotion properly. So they surround themselves with friends hoping it'll hide the crazy. It doesn't, but they do it anyway.

Middle school girls tend to roam around in packs. Sure, you'll see two hanging out every now and again, but more often than not, you'll see groups of them huddled together telling secrets and gossiping. Within each group you will often find smaller subsets of groups. Girl A and B are best friends just like Girl C and D and the four of them hang out together. But what happens when Girl C sides with A and B or A tells her something that D can't know? You start to get a pack mentality.
The problem is, in a pack, there always seems to be a low woman on the totem pole. The odd girl out. I know because I was frequently this girl. Someone always had a secret and I was almost never in on it. 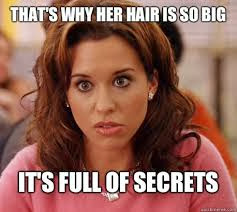 In middle school, she who holds the secrets becomes queen bee. Even if the secrets are really lies. Because everyone wants to be in on it. When you know something that only a few others do, it makes you look powerful. Everyone else envies what you know.

While the middle grade girl isn’t completely comprised of secrets and gossip, it does contribute to friendships, and the pack mentality. Groups of girls get along and talk about anything you can imagine. However, when the gossip ring starts, look out! Here comes drama with a capital D. And there's always at least one person on the receiving end. It can be alienating for that person.

I spent many lunch hours and recesses alone because of the pack mentality. But in doing so, I also discovered other girls like myself. I found solace in the hanging out with girls who had been through the exact same thing.

But this scenario can be tricky. If one of the outcast girls sees an opportunity to better their status, they often will. They will step on their equals to rise above the others around them. That girl hopes to gain notice and favor in the eyes of the queen bee which alienates the outcasts even further. And yet the outcasts (and everyone else) seem to envy the queen bee. Despite how they are treated, they want what she has. They look up to her. Her popularity and friendships seem genuine, even if they may not be.

It's often a hard lesson for girls to learn what a true friend is. Someone that won't stab them in the back after giving them a compliment. Or someone that won't throw them under a bus at any turn just to save themselves. But there are certain girls that find each other. They treasure each other’s ability to keep a secret, a real secret. They sympathize with each other. They get it, no questions asked. That was the girl I understood, because I was her. As much as middle school sucked, I learned a valuable thing, who my real friends really were.

So which kind of girl is your main character? The queen bee? The outcast? Someone in between?

Posted by Jamie Krakover at 1:00 AM

You explained very well the complexity that is middle grade girl cliqueiness *new word alert*. An enlightening post punctuated by the truth and power of true friendship.

YES! That's exactly it. It's so clicky and it's a constant round robin. You're in one minute and the next ... as Heidi Klum says... You're out!

I've a few "packs" in my day. I seemed to get along well with other girls because I was never that interested in attention (esp. guy attention), so we never had that kind of rivalry. I'm strong but laid back and was never interested in the drama ("you want the attention? whatev, I'll be over here") Though middle school my "pack" were kids from my church, my best friend Trina and two guys (one who ended up becoming my step brother).

This post is fun because it universal truth that just about all of us have personal comparisons too (at least the girls, what is the guys equivalent?)