I’ve had a jigsaw puzzle of story elements stashed in my vault for quite some time now: A contemporary story with a timeless feel, when the events aren’t limited to modern day trappings like kids constantly texting each other or spending all of their school nights obsessively playing online games; a quieter story about family and self-discovery; taking place in a smaller community, somewhat contained so the people there are familiar with each other and the main character has relationships with many of them; something set near the water, whether that would mean oceans, lakes, or rivers, with that watery setting important enough to the story that it almost comes alive as a character itself; something where there is just as much attention paid to the craft of the writing as the telling of the story.

We had a Middle Grade Minded post about a month ago, listing five reasons why people should read CATERPILLAR SUMMER by Gillian McDunn. Coincidentally, I had sent a book order home with my students that same week. I noticed CATERPILLAR SUMMER was one of the books available, and I ordered a copy. When the chaos of the final weeks of the school year began calming, I read it. I was pulled in deep from the very first page and only became more and more engaged as the story went on. This book turned out to be one possible version of the kind of book I wanted to write myself. With that in mind, I’d like to add to that original list of reasons to read this book with a few of my own.

*It’s a contemporary story with enough modern flourishes that kids today could recognize and relate to, but it has a mostly timeless feel. Our main character is a girl named Cat. The time she spends walking on the beach with her family and riding bikes with her new friend Harriet are things that could have happened thirty years ago as easily as last week.

*The story is layered around Cat’s relationships with the different people in her family. Her mother and her younger brother Chicken are both loving and frustrating parts of her life. Her father, who had passed away earlier, represents something of a hole in what her life is now. The grandparents she is just getting to know help her understand her parents in ways she hadn’t had the opportunity to before.

*Much of the story takes place on Gingerbread Island, along the coast of North Carolina. People can come and go between the island and the mainland easily enough, but the people who live on the island are tight-knit enough to give Cat and Chicken a good collection of characters to get to know and spend their summer with while visiting their grandparents.

*Maybe it’s because I’ve lived my whole life in a city on the edge of the midwestern prairie, but I almost always find stories set near or around the ocean to be captivating. Cat and Chicken’s grandparents live right along the water, an easy distance for walks along the beach, looking for turtles and shark teeth, or entering local fishing contests. Both Gingerbread Island and the ocean are such important parts of the setting that I’m not sure the story would able to be the same without them.

*The author, Gillian McDunn, is an extraordinary writer. This is a book I know I’ll be revisiting frequently, not only to enjoy the story but to both admire and study how she crafted it. I can’t recommend highly enough that you find yourself a copy of this book and read it. The time you spend this summer on Gingerbread Island will be worth it. 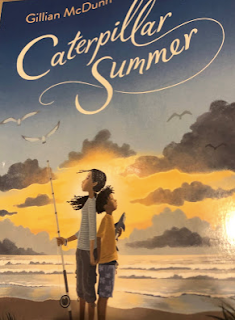