Today we have the AWESOME cover reveal of Omega City by Diana Peterfreund. Check out the exclusive excerpt below then scroll down for the beautiful cover to this amazing sounding book!

OMEGA CITY
Gillian Seagret doesn't listen to people who say her father's a crackpot. His conspiracy theories about the lost technology of Cold War-era rocket scientist Dr. Aloysius Underberg may have cost him his job and forced the family to move to a cottage in the sticks, but Gillian knows he's right, and plans to prove it.
When she discovers a missing page from Dr. Unerberg's diary in her father's mess of an office, she thinks she's found a big piece of the puzzle--a space-themed riddle promising to lead to Dr. Underberg's greatest invention. Enlisting the help of her skeptical younger brother, Eric, her best friend, Savannah, and Howard, their NASA-obsessed schoolmate, Gillian sets off into the ruins of a vast doomsday bunker, deep within the earth.

But they aren't alone inside its dark and flooded halls. Now Gillian and her friends must race to explore OMEGA CITY and find the answers they need. For while Gillian wants to save her dad's reputation by bringing Dr. Underberg's secrets to light, there are others who will stop at nothing to make sure they stay buried...forever.

An exclusive excerpt from OMEGA CITY:

I can’t tell you who started screaming first. Truthfully, it might have been me.
But after a few seconds of shrieking ourselves hoarse, we sort of tapered off. After all, it wasn’t a roller coaster, dropping us down into nothingness. More like . . . an elevator, clanking us down in slow, steady fashion. And who screams in an elevator?
This one apparently came complete with elevator music. A tinny, tinkling melody started playing, and we all quit shouting “Help!” and “Stop!” And “Howard! What did you do?”—that one was Nate and Savannah, combined—to listen.
We were only a few stories down when the music was replaced by words.
“Greetings, survivors!” said a cheery man’s voice.
Survivors? It was tough to see my friends’ faces in the pale running lights. But since we’d all gone from screaming our heads off to shocked silence, I imagined they were making the same face I could feel I was. Eyes wide, mouth wider.
The voice went on, as calm and carefree as ever:

Congratulations on escaping the attack, plague, or natural disaster that has brought you here. Our condolences on the family members and/or appendages you may have lost during the end of the world.

“The end of the world?” Savannah choked out.
“Appendages?” bleated Eric.

Rest assured, you have reached safety.
We would like to take this opportunity to remind you that pets, plague-infected persons, enemy combatants, and firearms are not permitted entrance. Please terminate or discard these items before your descent.

The music started up again, no doubt meant to accompany our efforts to do whatever it might take to . . . discard our pets or plague-infected loved ones. Down and down we went, as the music looped through the speakers and echoed up into the endless tunnel that we could still make out beyond the metal grid at the top of the elevator. We all stared up into the shaft as it receded into shadow and we descended deeper into the Earth.
“What’s happening?” Sav asked. “Where are we?”
We all looked at Howard, but he was staring through the grate above our heads as if it would provide some sort of answer.
“Gillian?” Eric prompted.
I shook my head. This wasn’t in Dad’s book. I don’t think this was even in Dad’s world. And still, we went down.
Finally, with another enormous grinding of gears and screaming metal, the elevator touched the ground. The music morphed into a brassy little fanfare, like we were about to meet a king, and the disembodied voice said:

And now... Check out this gorgeous cover! 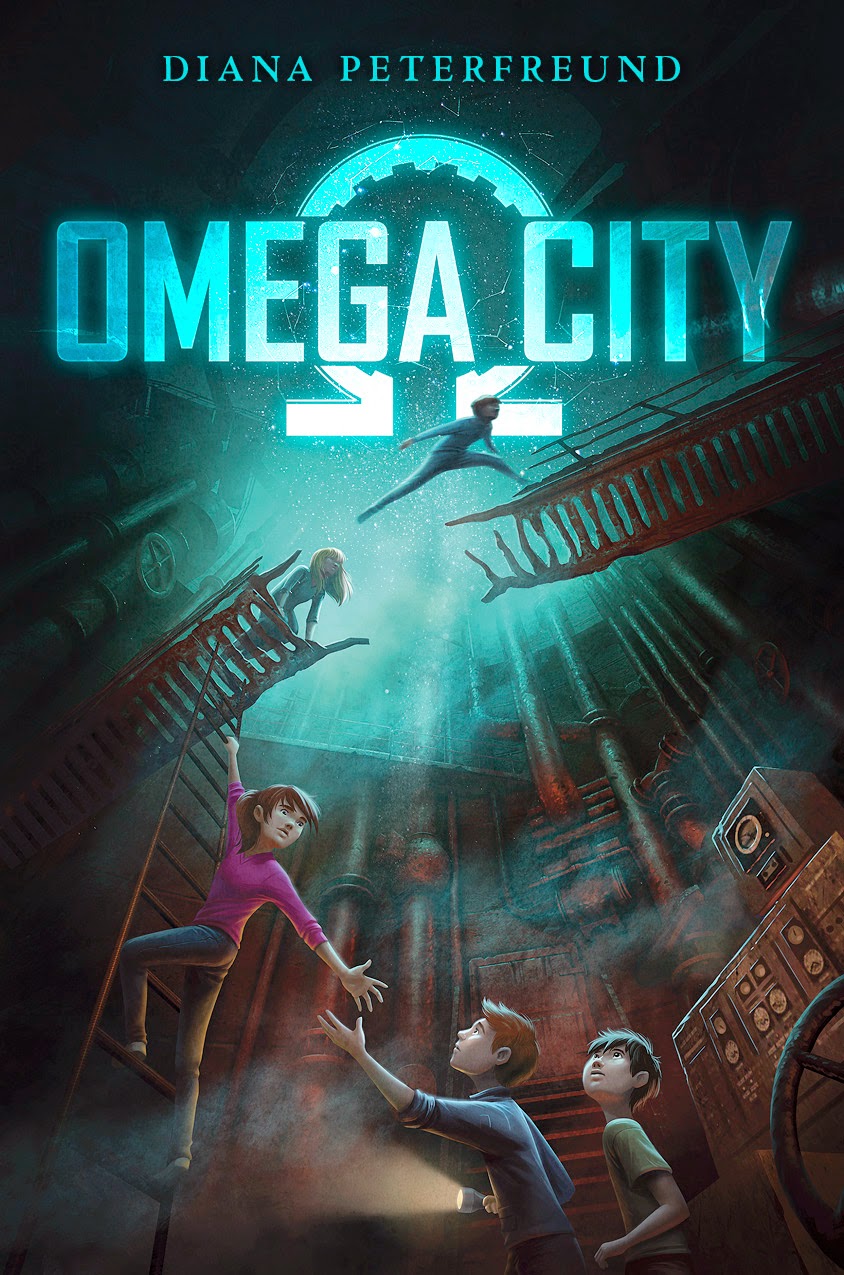 Awesome cover right? Omega City releases from Balzer+Bray on April 28, 2015. Check out the pre-order links below!

Author Bio:
Diana Peterfreund is the author of many books for adults and chidren, including the critically acclaimed For Darkness Shows the Stars and Across a Star-Swept Sea. She lives with her family outside Washington, D.C. in a house full of bookshelves, and is always on the lookout for lost cities and stray rocketships. Find out more about Diana and her books at http://www.dianapeterfreund.com.
Facebook: https://www.facebook.com/diana.peterfreund
Twitter: https://twitter.com/dpeterfreund

Posted by Middle Grade Minded at 5:00 AM

Thank you so much for hosting my cover reveal. I love it so much.

You are so welcome! Thank you for allowing us to join in the cover reveal fun! :)