Cover Reveal: THE DOLLMAKER OF KRAKOW by R.M. Romero

Today we’re privileged to host the reveal for the extraordinary novel THE DOLLMAKER OF KRAKOW, the middle grade debut by author R.A. Romero. Equal parts fairy tale and historical fiction, this is a book of both enchantment and consequence.

Karolina is a living doll whose king and queen have been overthrown. But when a strange wind spirits her away from the Land of the Dolls, she finds herself in Kraków, Poland, in the company of the Dollmaker, a man with an unusual power and a marked past.

The Dollmaker has learned to keep to himself, but Karolina’s courageous and compassionate manner lead him to smile and to even befriend a violin-playing father and his daughter—that is, once the Dollmaker gets over the shock of realizing a doll is speaking to him.

But their newfound happiness is dashed when Nazi soldiers descend upon Poland. Karolina and the Dollmaker quickly realize that their Jewish friends are in grave danger, and they are determined to help save them, no matter what the risks.

I’m not doing a full review here, but I absolutely loved this book. I read it over a weekend, not rushing through it but making the time necessary to take in how wonderfully crafted the story is, and to enjoy the exceptional voice.

As for the cover? Here you go. Drink it in…. 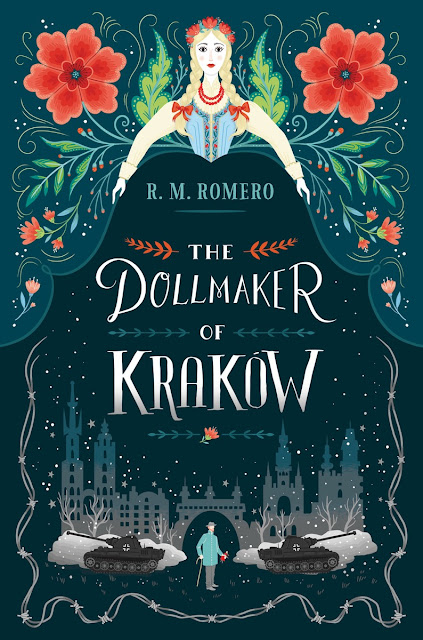 It’s a little surprising to see something so folksy and comfortable gradually become darker and intimidating, but it’s a perfect reflection for how the story evolves.

INTERVIEW WITH THE AUTHOR

Thanks for giving us the chance to participate in your cover reveal! How much input did you have about what the cover should look like?

I had a major role in choosing the artist, which was amazing! While I was writing The Dollmaker of Kraków, I collected many historical photographs and illustrations that related to the story on Pinterest, including work by Lisa Perrin. When my editor asked me what my thoughts were about how I wanted the art to look, I linked her to my Pinboard. She looked over and decided that Ms. Perrin would be the perfect artist for the project. Happily, Ms. Perrin agreed to do the cover and the inside illustrations!

What can you tell us about the artist? What was it like seeing the cover art for the first time, and knowing how well this image reflects the story inside?

Lisa Perrin’s work is not only incredibly beautiful and unique, but is often inspired by Eastern European and Jewish folk tales! This made her the ideal artist to work on my book. You can read an interview with Ms. Perrin about her creative process here.

I didn’t really have a concrete idea of how I wanted the cover to look...until I saw Ms. Perrin sketch for it and gasped. She captured the feeling and the details of the story so well. I couldn’t have been more pleased and I still never get tired of looking at it.

I feel like each time I look at it I notice another connection to the story that I overlooked before. What were some of the first things about it that got your attention?

Karolina, the doll at the top, was the first thing that drew me in. Her expression, the traditional costume she’s wearing, the flowers surrounding her… She looks exactly how I had envisioned her. I also really love the ghostly silhouette of Kraków in the background with the stars and the snow. Kraków is such a unique and beautiful city, and it’s almost a character in the book. It made perfect sense for it to be featured so prominently on the cover!

Could you tell us some about your journey to publication? You mentioned this book started as a NaNoWriMo project. What happened from there?

The book did start out as my 2014 NaNoWriMo novel, but I certainly didn’t sent it out on December 1st. I spent about nine months after I wrote the original draft revising, but even as I was in the midst of editing it,  I was a little afraid it would remain on my hard drive forever. I knew it was an unusual mix of fantasy and history--what if no one wanted it? But Jenny Bent, who became my agent, believed in it. I was elated that it spoke to her; this is a book that’s very close to my heart and she understood it so well. And so did my editor, Beverly Horowitz. During the first phone call we had together when she mapped out her vision of what The Dollmaker of Kraków would look like if published by Delacorte Press, I knew she was the right editor for the book.

Having this book published is a dream come true and I hope that it will be meaningful for many readers.

There were so many things I enjoyed about the book — the parallels between the events in The Land of the Dolls and Poland, the detail that went into the world-building and cultural descriptions of both settings, the relationships between the characters…I seriously could go on and on here. What inspired you to bring two such different genres together into one story?

Thank you so much!

I believe that fantasy is a powerful means to confront difficult issues by seeing them through the lens of metaphor. Fairy tale protagonists in particular are often faced with very real issues such as abuse, poverty and oppression. Therefore, it seemed natural to have the fantastical Land of the Dolls mirror our world, and to incorporate fairy tales tropes into the story while still having it grounded in history. This felt especially appropriate since I was drawing so much inspiration from Polish folk tales, where magic simply exists alongside more ordinary happenings.

THE DOLLMAKER OF KRAKOW will be released on September 26, 2017, but it’s available for pre-order right now! You can also follow the Goodreads link below for more information about a giveaway, available from March 9 through March 16!

Preorder the book from Amazon here

Information about the Goodreads giveaway here

This story sounds amazing! So original and creative. The cover is beautiful. I must have this book! Looking forward to September.

Can't wait for this book!

The originality of the story was one of the things that struck me the most. I was so impressed by how she took two completely different genres and fused them together so perfectly.

Wendy, it is sooooooo good....

You'll love it. It's such an affecting book in so many ways.

I am so intrigued by this story. The cover is beautiful, too. I went to Krakow years ago and would love reading a story in that setting.

Krakow is prominently featured as a setting. If you've been there, I can only imagine how much more you would enjoy the book.